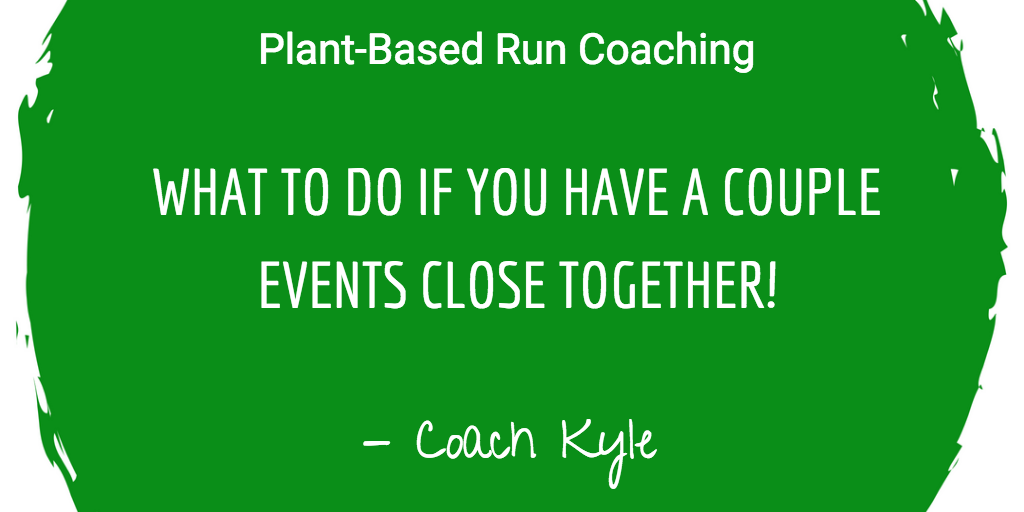 What to do between events close together

When you have events 1 day to 3 weeks apart, they are close enough that the damage done during the first race can potentially negatively influence the second event.

To run your best on both days there are a few considerations you must be mindful of.

1) Properly PacingIf the first event is longer than a half hour and you run it at best effort, you’ll probably have some sort of fatigue the week after. When the event is 5 miles to 26.2 miles it could take a week to a month to actually be regenerated from the race if done at best effort.

This means you may have to take the first event at a less than best effort if you do not desire it to hinder your running ability at the second race. A half three weeks before a half is cutting it close, but a 5k a week before a half should be no problem for most people. In the former example doing the first half at a 9/10 effort and the second half at a 10/10 effort will likely result in the best average time between the two. Yet for the latter example you can probably do the 5k at best effort and it should not hinder the half.

2) Regeneration After the 1st EventIf you give your body the opportunity to adapt after the first race, if you’re lucky you can even benefit from it for the second run. This mainly comes down to following a reverse taper to rest and ease back into running gradually and eating well before, during, and after the first race.

“Here are some great tips on how to handle the time between two races that are close together!” – Click to Tweet!

3) Tools to Speed RecoveryThere are a number of “tools” you can take advantage of after a race to speed up your recovery. What you should be aware of is that these may decrease the adaptation (benefit) you get from the first workout, but in most cases when you’re under a time crunch for a second event you’re not looking to benefit from a race.

First is curcumin, the powerful anti-inflammatory in tumeric or ginger, can possibly decrease muscle damage when taken after a hard training session. This is not something to use too often, as this decrease in muscle damage and inflammation likely results in less benefit from the workout. But like I said, you’re not racing to get better (that’s what workouts are for).

Second is the ice bath. Much like curcumin, this may decrease fitness adaptations from a workout but after a race it may speed up how quickly you are able to return to full strength.

Update: I had someone reply back to my newsletter about this subject asking about two ultra marathons twelve weeks apart. My answer was to follow a three week running reverse-taper then go back into week nine of the schedule this person followed for the first ultra.