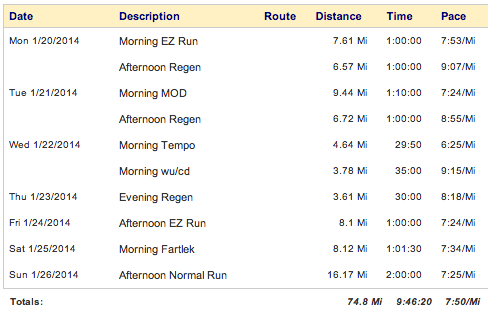 I’m actually a bit surprised that I hit 75 miles since I did not double up on runs for the last five days, and one of those days was only a 30 minute regeneration run!

A decision I did come to though, is that I feel more comfortable not doubling on days and focusing on quality miles over quantity. During this week without every non-hard run day being a double day, I was able to run much faster and smoother while still at that very easy effort level. I also felt much better outside of running, with my energy levels. Not leaving at 7am and going to the rec, and going back to sleep for 1-2 hours after Desi leaves, means I’m getting 8-9 hours of sleep instead of 7-8. Big difference there, no wonder I felt so good during the last half of the week!

Lets say I take out the two regeneration runs I did at the beginning of the week. That would have made the total volume 61 miles at a 7:34 pace for the week! I feel that is more preferable than the previous two weeks with slightly more miles but averaging 30 seconds slower overall. My injury risk would likely decrease, which is always a good thing.

The highlight of the week was definitely my 2 hours at an average 7:25 pace. It was a very low effort run, only the last 30 starting to feel any sort of difficulty. The second half of the workout I switched from a steady effort (never looked at my pace) to a fartlek. Every time I could not take the tangent around a corner I would switch speeds. The “on” segments were about 6:50-7:30 pace and the “off” segments were 7:30-8. Sometimes I would have to change paces after only 25m and sometimes 300m, it just depended where the other people were on the track. This was a 100m track and I ran about 260 laps, the first 4 miles I was solo and ran the “wrong” direction for the day, as soon as someone else came to the track I switched and ran the correct direction.

This workout also felt good because I was very smooth and associative for the entire two hours. I always put my iPhone, earbuds, and armband on the ledge but almost never need music/podcasts to get through a run. I did this entire workout by simply focusing on what I was doing. I was never for a second bored or tired. Not quite flow or “the zone”, but close.

As for a disappointment, maybe that tempo run. I was 10 seconds slower per mile than goal pace. Not a big deal, and who knows if the treadmill was accurate. Either way, that was as fast as I could have ran for that 30 minute stretch. Really, I probably would have been able to do it if I had not done the two extra recovery runs the previous two days and been slightly more fresh. 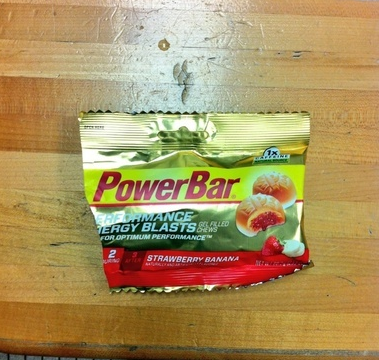 Gave these a try. Loved the taste and texture. They were a sample, I’d probably not buy sports nutrition myself. I do prefer the gummies over gels though, I like to stick one in my mouth and suck on it, let it melt instead of a rapid shot of gel carbohydrate at once time.