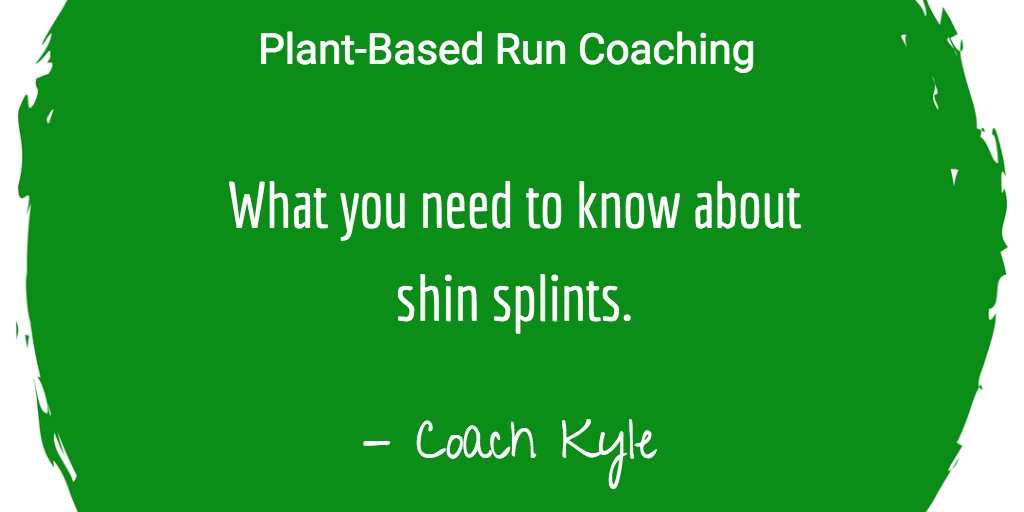 Shin splints compete with runner’s knee in two categories. The first is, “Which one’s name is vaguer?” and the second is “which injury is more common?”. What’s interesting about these two conditions is whenever anyone gets a twinge or pain in their shin, regardless of the details, they may label it as shin splints. With runner’s knee it is the same, often any knee pain is labeled as runner’s knee.

Terry Smith at Kinetic Revolution accurately described the pain and symptoms of MTSS:

In typical cases, shin splints pain is usually felt two-thirds of the way down the tibia, just off the inside edge of the bone. In the early stages, shin splints pain is usually felt at the beginning of a run and then normally subsides during the training session itself. Commonly, symptoms also tend to reduce a few minutes after a given run session has finished. If the injury worsens, shin splints pain is felt in less intense activities and can be present at rest. It is often painful to apply direct pressure to the affected area. Because the anteromedial border (front/inside) of the tibia is directly under the skin, pitting oedema, and even callus formation, can be felt on upon close examination in some cases. This is thought to be a response of the periosteum to micro-fracture formation.

I also really liked what Brad Beer has to say about the pain:

Shin splints is a continuum condition, whereby the shin bone will progress from being normally loaded, to slightly overloaded, to very overloaded, to eventually incurring fracture. During the ‘overloading’ stages the bone becomes painful as the outside of the bone (the cortex) develops tiny microscopic fracture lines. At a cellular level, when pain is experienced the bone’s repair mechanisms are being outstripped by the bone being damaged and broken down. The very end stage of shin splints is a tibial stress fracture. At this point the bone fails and fractures due to being repeatedly overloaded beyond its tolerance or ‘failure point’ through continued stress and loading associated with running.

Brad Beer describes this comparison. They are often confused:

We’ll take a cue from John Davis at Runners Connect for this.

Scientists now hypothesize that the root cause of shin splints is repeated stress to the bone during running, caused not by straight-on impact, but a slight bending of the bone when it is loaded. Much like a beam on a bridge or in a skyscraper bows slightly when it’s supporting a lot of weight, your tibia bends backward slightly on impact with the ground, putting compressive forces on the medial side of the bone. In healthy runners, the bone stress after a long, hard run is not a problem. The body responds to the stress on the bone by remodeling the tibia to be stronger and thicker. This is why shin problems are more common in less-experienced runners: their bone has not yet adapted to the stresses of a high-impact activity like running. Unfortunately, this remodeling process takes several weeks to a few months to complete, and there is a period where the bone is actually more vulnerable to damage. Just like remodeling your house entails tearing out some walls before adding new construction, your body has to tear out some of the old bone tissue before strengthening it. As a result, having a small tibia or weak bones puts you at an increased risk for shin splints, since your weakened tibia is more vulnerable to injury when it is remodeling its bone structure.

And Steve Gonser at Run Smart Online discusses this process.

Ultimately, an unattended shin splint will progress. A slight “ache” transforms into pain that limits you from running (stress reaction) and ends with pain that is present with walking and standing (stress fracture). You’ll want to focus on strengthening key areas with runner-specific exercises. Targeting your hips, knee, and lower leg can help prolong fatigue and devastating tensile forces.

Knowing all of this,

The treatment for shin splints becomes primarily about reducing the torque stress on the tibia. This is done in a number of ways:

To reduce impact one may increase the step rate / cadence while running. A slightly higher cadence, often suggested to be optimal in the 170-180 range, may decrease the loading on the tibia since a higher cadence can reduce over-striding. To strengthen the bones you may consider supplementing with Vitamin D3, Magnesium, and Calcium. And when it comes to strengthening the muscles every day should be hip day!! Further Reading So You Have Shin Splints, What to do Next? | Brad Beer | “Many runners incorrectly believe that they have shin splints when they experience pain at the front and outside of their shin bone.”

What I have my athletes do 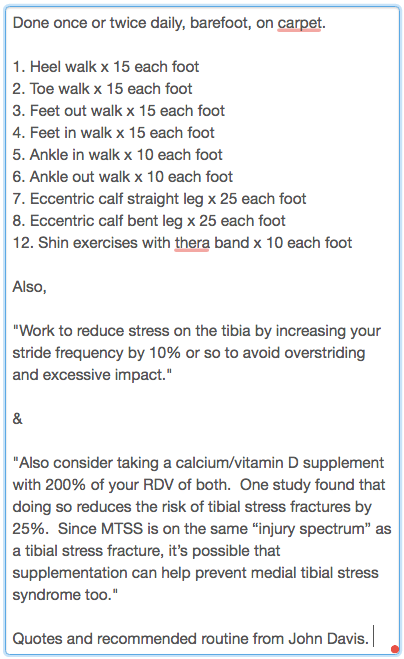 When the athlete can hop on the single leg easily without pain, they are likely OK to go for an EZ run that day.

Current concept review: vitamin D and stress fractures. | Foot & Ankle International | “we recommend that most patients receive 800 to 1,000 IU and perhaps as high as 2,000 IU of vitamin D3 as outlined by the previously mentioned review article since vitamin D is a safe treatment with a high therapeutic index. Also, at least 1,000 mg of calcium per day is required for optimal bone health and 1,200 mg may be needed in certain populations.”

Selected Food Sources of Vitamin D |National Institute of Health | “Foods providing 20% or more of the DV are considered to be high sources of a nutrient, but foods providing lower percentages of the DV also contribute to a healthful diet.”

Diet and Stress Fractures in Male Athletes | Sports Injury Physio | “We’ve known for years that female athletes are at high risk of developing stress fractures if they limit their food intake too severely, but this research has been lacking for their male counterparts.”