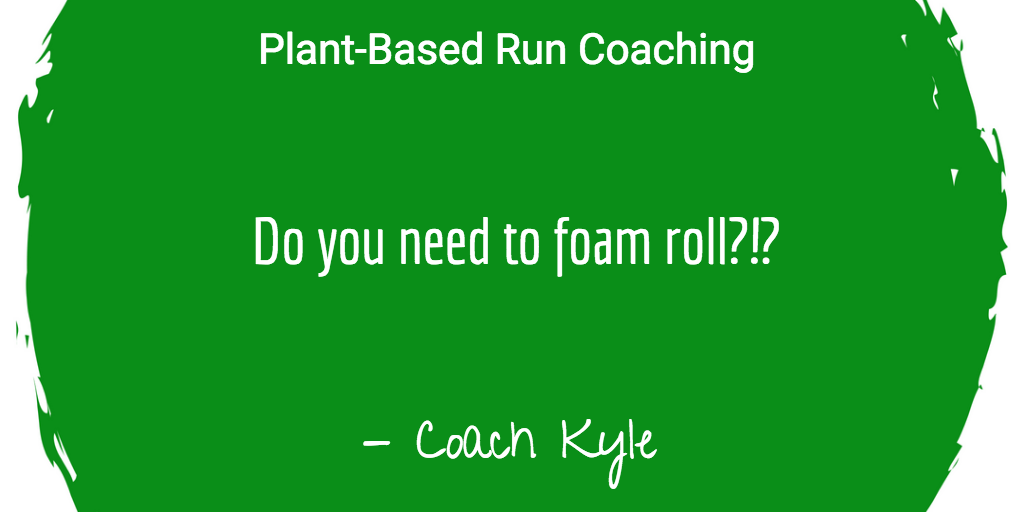 Foam rolling is a big deal. You can get some fancy torture looking rollers, balls that vibrate, and the good old fashioned Stick. I bet you’ve seen various brands have tables set up at race expos. They’ve invited you in to do some rolling. What EXACTLY is going on here?So foam rolling, aka self-massage, aka myofascial release, is putting pressure on soft tissues to reduce scar-tissue, adhesions, and trigger points (knots) by stretching and loosening the fascia and increase blood flow.

(Get your foam roller right here!)Below, you’ll learn some mistakes to avoid or how to correct them. Biggest foam rolling mistakes:1) Doing it right before a workout. Studies have shown decreases in running economy if foam rolling is done immediately post-rolling. You generate less power right after self-myofascial release. 2) Not doing it for long enough. This is a big problem I see with static stretching, as well, you simply don’t do it long enough. We’ve all seen the people do the 15 second “touch your toes” or the “pull heel to butt” quad stretch….the same mistake is being done with rolling.3) Not moving around. Don’t foam roll just the calf, if your calf is aching. Massage your arch, your hamstrings, and your glutes as well.4) Not staying in one spot. Now it’s also important to realize that if you have a trigger point area in that calf, putting some pressure just there and relaxing into it is good practice. Why you should foam roll:1) One of the biggest reasons is the demonstrated effects of foam rolling on reduced pain associated with DOMS (delayed onset muscle soreness).2) Aside from reducing general DOMS, foal rolling may reduce muscle tender spots and attenuated myofascial pain.3) Rolling can induce a slight increase in a range of motion of a limb. How to foam roll correctly:1) Don’t do it immediately before exercise since it lowers running economy and power, however a study showed that if there are 3-hours between rolling and running, there’s no concern. 2) Take your time. 60 seconds should (in my opinion) be the minimum each muscle group gets of rolling when you do it. Many studies use 30 seconds but I really feel 60 is more effective! Fascia is thick, fibrous, tough. 3) More painful does not necessarily mean better. One study by Behm, D. ECSS 2017 found that higher intensities or pressures of rolling did not augment the improvements in (at least) range of motion.4) However, I do recall reading about a researcher who suggested a harder roller is more effective than a softer one. Maybe my “poor man’s roller” of a PCV pipe wrapped in old race shirts is better!

What are you doing well when it comes to foam rolling and what do you need to work on?

I’m also going to throw the below links in for your consideration. While foam rolling is probably a good thing, it’s not always perfect.

Foam Rolling: You May Be Hurting Yourself. | Ryan Booth at Reciprocal Innerventions | “Maybe people just don’t want to learn how to correct firing patterns in their  hips, hamstrings, quads and hip flexors etc. If your hips are mobile, of what use is a roller? None. What, after all, are you using a foam roller for? Flexibility? Pain relief? Recovery?Maybe if I told you that there is no proof it does those things you’ll stop? Maybe you’ll listen to a bit of reason.”

Your IT Band is Not the Enemy (But Maybe Your Foam Roller Is) | Robert Camacho at Breaking Muscle | “As with most movement disorders the true solution is mindfulness of your body position and mindfulness of your movements. Weak hip abduction is insidious because it can cause all sorts of issues. Luckily, it’s rather easy to identify and deal with. Get your glutes firing again and maintain mindfulness of their proper use while working out. Yeah, it really is that simple. Now get out there and get moving.”

Foam Rolling 101 | Charles Poliquin | “The point is that just because a product is popular and sells well doesn’t necessarily mean it fulfills all the claims of its manufacturers and distributors. Another example: foam rollers.” Get your foam roller right here!