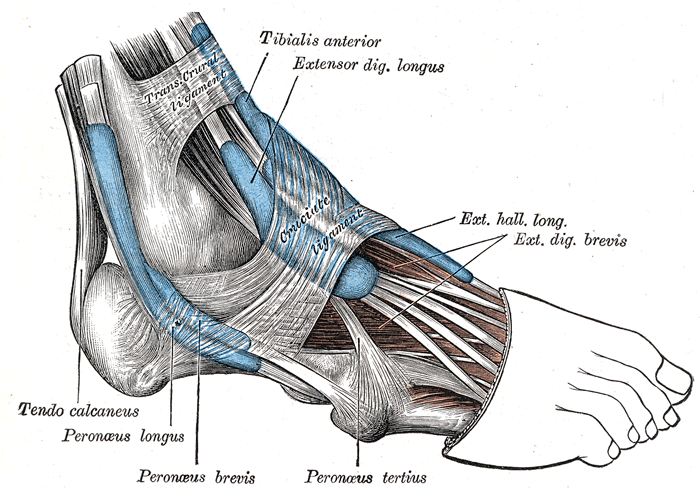 What is peroneal tendinopathy?

According to MoveForwardPT.com, peroneal tendinopathy is characterized by an aching pain and swelling in the peroneal tendons located in the lower, outside portion of the ankle. A tendon is soft-tissue that attaches a muscle to a bone. The muscles involved in this condition are the 2 peroneal muscles in the lower leg, called the peroneus longus and the peroneus brevis. (In some texts, the muscles are referred to as the fibularis longus and the fibularis brevis.)

The peroneus longus muscle originates on the fibula bone, which is located on the outside of the lower leg. It wraps around the bone on the outside of the ankle (the lateral malleolus) and attaches to the plantar (bottom) aspect of the base of the big toe. The peroneus brevis muscle also originates on the fibula, but attaches to the base of the fifth toe. These muscles are responsible for moving the foot in an outward direction, and pointing the toe and foot downward. Together, they help to balance and stabilize the foot and ankle. Most ankle sprains occur as a result of the ankle rolling inward. One reason for this is that the peroneal muscles and tendons are not as strong as the muscles on the inside of the ankle. If these muscles are weak, they may not be able to prevent the ankle from rolling inward. These muscles and tendons can also be overworked if the foot isn’t hitting the ground in proper alignment. If the foot hits the ground more on the outside of the foot (supination), the peroneal muscles have to work harder to stabilize the force of gravity with weight-bearing activities. Proper footwear or orthotics can help with proper foot alignment. Peroneal tendinopathy will usually worsen with activity, such as running or walking and improve with rest. It is an overuse injury, meaning the tendons can become enlarged, thickened, and possibly swollen.

Do you have it?

I like how Runners Connect laid out the description: Peroneal tendonitis presents as a sharp or aching sensation along the length of the tendons or on the outside of your foot.

Running will be painful, as will trying to dorsiflex and evert your foot, especially against resistance.  There might be some stiffness and soreness if you do “ankle circles” too, or even when passively stretching the tendon.

There shouldn’t be much pain while standing or when you push gently on the injured area.  However, if the outside of your foot is very tender to the touch, and if you have a lot of pain standing or even while non-weightbearing, you may instead Have A Fracture On Your Fifth Metatarsal.

These are uncommon, but can cause a lot of trouble if they aren’t addressed right away. So if you’re not sure whether you have peroneal tendonitis, see your doctor as soon as you can.

Does it matter which of the two peroneal tendons you’ve injured?  From the relatively meager scientific literature on peroneal tendonitis, it does not seem like this is the case.

In fact, somewhere around 33% of all cases of peroneal tendonitis appear to involve both tendons anyways. So any rehab program will have to address both the peroneus longus and the peroneus brevis.2

Physioworks.com says there are a number of different factors which can cause peroneal tendonitis, including

How can you treat it?

Here is a video from Doctor Jo that shows some stretching and exercises for the calf, achilles tendon, soleus, and the peroneal tendon itself.

What are real runner experiences with this?

+1 for the gradual return to running. But there might be more going on. I struggled for eight months, tried to run through it, tried all kinds of PT, tried total rest. Out of desperation I went for sports massage. During the third session she found and worked out a huge knot in my calf that was impinging the tendon. Without that I was never going to recover, the tendon was being artificially shortened. The next thing that helpedwas doing stairs, walk up run down, 10x 100 steps, seven days/week. Somebody recommended these on another thread, and they really work. After a month of that I returned to running. At first I was doing three days, two at 45 minutes, one at 90 minutes. Tried that for a few months but the tendonitis was hanging on. So I divided that time into seven days, 23 minutes for six days and 46 minutes on Saturday. That was the magic. Every week I increased by one minute — by the end of 2015 I was up to an hour for six days and two hours on Saturday. For 2016 I have started doing 5Ks.Two years this month from the initial injury, and it’s still not 100%! But maybe 97%, which I will take. I do yoga and have to be careful not to do too much lotus pose, this brings it back. (Be careful with figure-4 stretch.) I use the stick on my calves after every run. I had to experiment to get just the right pressure with that. I still do the stairs five days.Okay all that was on the left side, and started with a calf injury during yoga. I have also had a quick case on the right side, caused by shoes. I rotate shoes, one model was pressing ever so slightly on my ankle. The PT caught that one, asking questions about did I have any pain in the ankle, where the tendon goes by it. I said no, but then started paying attention on my runs, and realized the truth. Ditched those shoes and started recovering right away.All of which is to say that peroneal tendonitis does not come out of nowhere. Dig around for what is causing it. The barefoot running idea is interesting. If that works, to me it says the problem is the shoes, but NOT over-pronation.I’m 54 years old, I bet you can bounce back much quicker than I did. Good luck.

I’ve had a similar experience as Alan Bennet (above). No amount of PT helped, until the therapist took a long shot guess and suggested putting a tennis ball under my hamstring as I sat in a chair. I immediately felt a deep knot in there and just a few minutes of that I was 100% cured. Amazing and kind of sad that I had lost about half a year thinking I couldn’t do anything.To this day, I’m convinced 9 out of 10 joint pains are caused by just muscle knots. The trick is finding them. They’re tricky sometimes.