In June of 2016 Desi took students abroad for a service-learning trip to Ecuador.

Since I work from home, I took it upon myself to go on a bit of an adventure myself.

For the first bit of her trip there were some local running events I wanted to attend. I volunteered at the Dino Run 5k by marking the course, MCing, and running as sweep to pick up flags, also I joined Roger & Chris H’s hosted fun run a few days later. After this I packed up everything I needed and headed to Sheridan WY, right outside the Bighorn Mountain Range.

For my Sunday – Thursday stay I booked a site at a KOA due to it having showers and wifi. 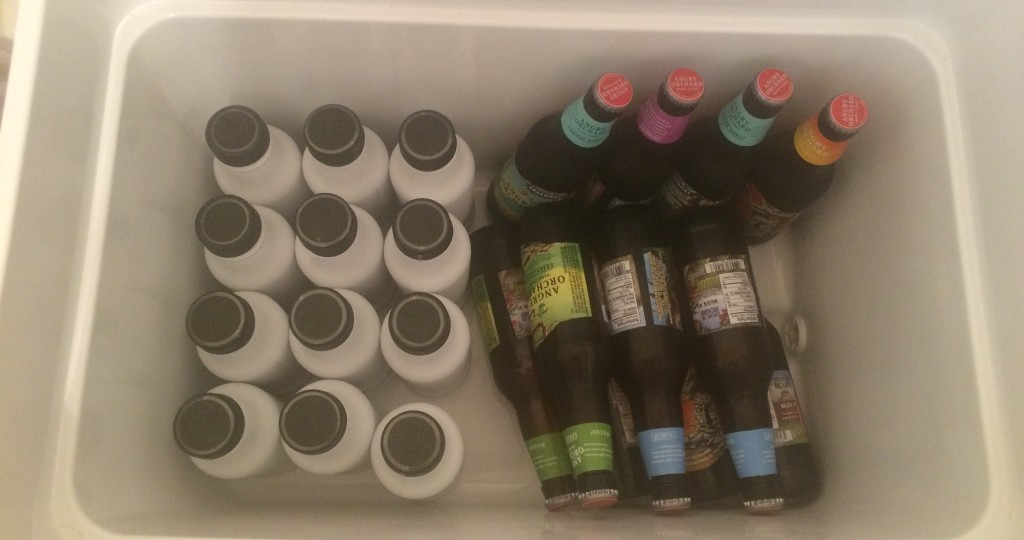 I bought some Soylent, which is basically a meal replacement shake, in an effort to have some meal options that did not require any prep or cleanup. Through some searching on the Soylent Reddit I discovered that people have done just this in the past. I’ve never tried it before, but was pleasantly surprised. It tasted like…chalky milk. Definitely not bad, not terribly good, but not bad. I imagine if you mixed some chocolate syrup into it, it would taste like chocolate milk.

The cooler was filled up with ice and it sat in my passenger seat for the entire trip and was cold throughout the duration, which was a pleasant surprise!

The beer and firewood was for the evenings when I assumed I’d be able to work from my laptop at the campground, hanging out by the fire and having a beer or two. This ended up not being the case as my campsite had no fire pit and the wifi was useless. (oh, and the showers/restrooms smelt like pee). 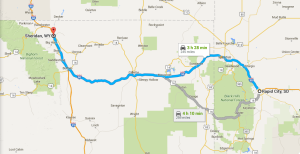 If you’re not familiar with Sheridan, it is a town of about 20,000 right outside the Bighorn mountain range. An easy drive my Rapid City, SD.

There are a number of coffee shops in Sheridan that I scoped out online and had planned on visiting to work at. Since the wifi at the KOA was not helpful, I basically made my rounds at Andi’s Coffee House, Java Moon, a Starbucks, and the Black Tooth Brewery. 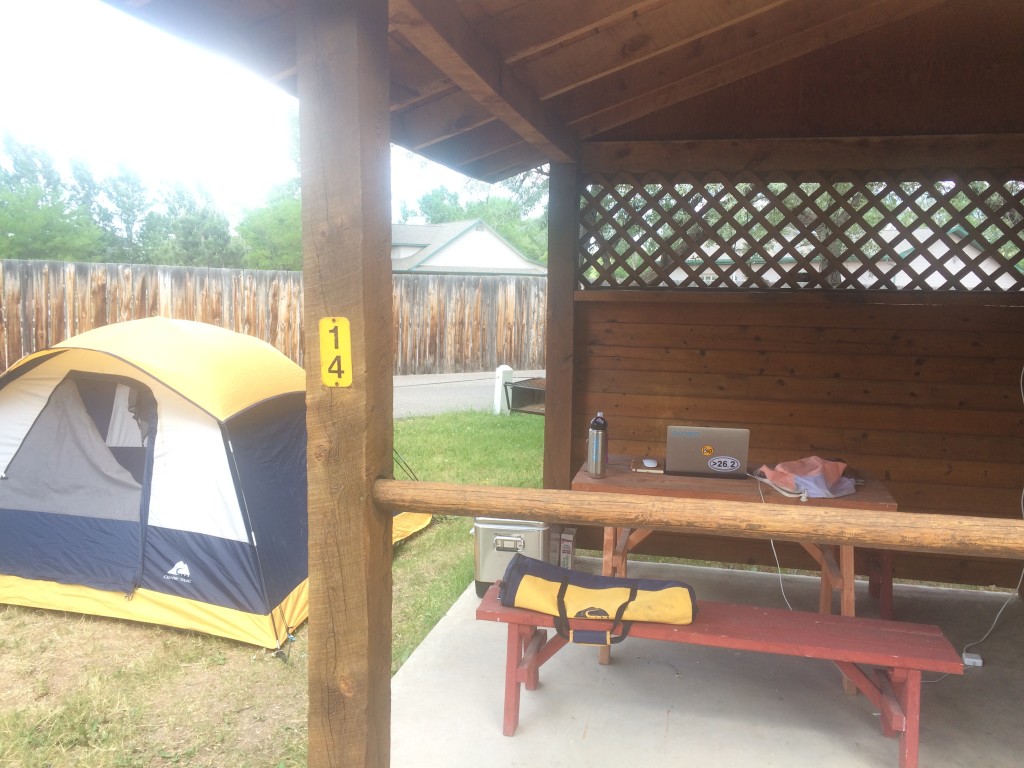 Honestly I didn’t meet a lot of people. I spent 6 hours a day working at a couple local places and the other times I spent out exploring. But, I did get to sit down and chat with a few.

Julie & Walter saw my >26.2 sticker on my computer at the brewery and struck up a conversation. They were both older than my parents and Mark actually grew up very close to were Desi did! They now lived in Sheridan and Pam had done the Big Horn 30k a number of times. We chatted for a while about trails, where I should explore, the Black Hills, etc.

Kelly was roughly my age and was the only person I saw at the KOA under 40 and over 13 years old, and our camp sites were next to each other for the one night she was there. The life lesson I took from her was to not do a job just for the money, if you can do something else you enjoy (even if it pays less). That enjoyment from what you do for 40 hours a week is worth a lot. She had worked a unsatisfying job in the oil industry and made a great deal of money, saved up, and quit. She was now driving around exploring the country for a few months.

Kyle was an older gentleman who I ran into at the KOA laundry room as I was looking at the map. He had ridden his motorcycle in every contiguous US state. His mother’s maiden name was Kyle and he was named Kyle to continue the family name since there were no male children to do so.

Seth & Burt were two local runners who I ran with one day. They were actually both past students at Black Hills State University and I’ve actually bumped in to Seth twice at the Big Hill race in Spearfish (although I didn’t know him at the time so never spoke with him).

Locals gave me all sorts of tips on easy spots I could go and run. Since I was working still, I had limited time and was basically only allowed 1 excursion a day. From Seth, Pam, and the guy at the running store that I asked this question to, there were a couple repeat suggestions and those were the ones I did.

I actually first saw this in a two page spread on the Sheridan WY summer magazine. It was just out of town and super easy to find (literally, drive on 5th st until it turns to gravel and park at the trail head). This trail was 4 miles out and 4 miles back of single track just through a field, but the view was quite enjoyable. It was a good first “adventure” in Sheridan due to it being so easy to reach.

Soldier Ridge view of the Bighorns. Click to enlarge. 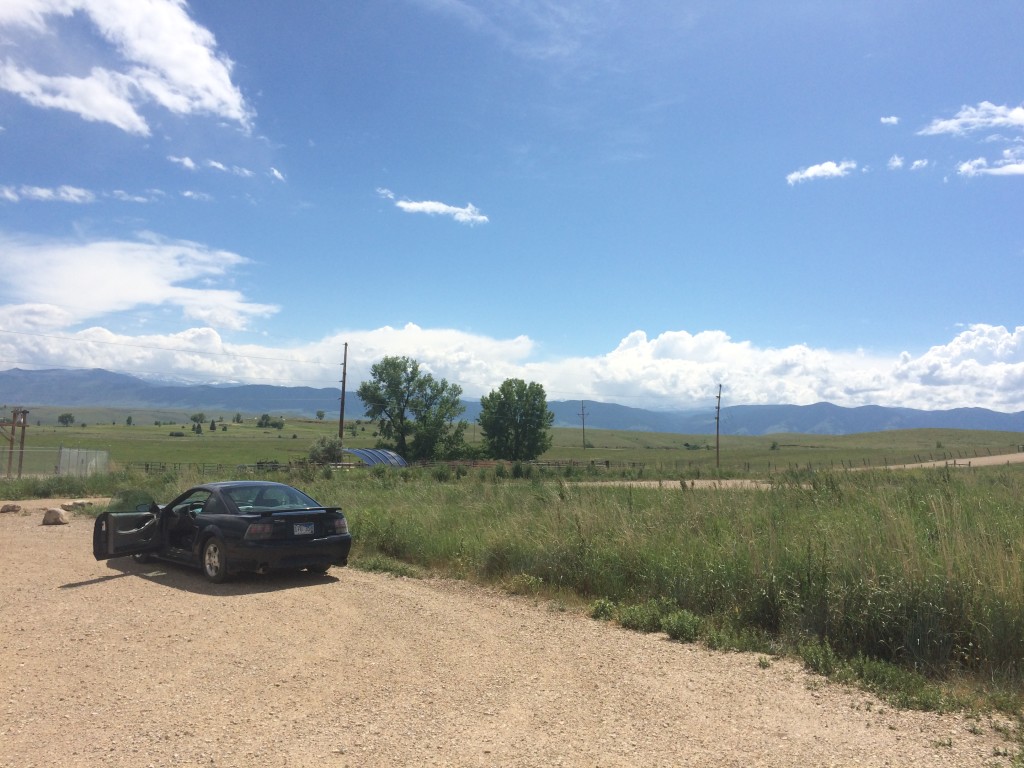 This is an absolutely beautiful museum just just south of Sheridan and in my opinion is a must see. The Native American artifacts, paintings, and local history was incredible and well worth a $10 entry fee. The bistro at the top offers good food on a limited menu and a great view!

When I told the man at the local running store that I intended to visit the Brinton, he recommended I head farther south towards Little Goose Canyon Road. This was simply a gravel road that turned into a jeep trail that turned into a trail trail. My instructions were to drive as far as the Mustang would take me (there’s a parking lot right before a bridge where it turns into a jeep trail), park there, then run up as far as I wanted. This was just on the very very edge of the mountains. It goes up up up and the views are quite enjoyable, especially looking down upon Sheridan area.

On my final full day in Sheridan I visited this location to the NW of town about a 45-60 minute total drive to the trailhead. Here is where the 100 milers for the Bighorn 100 start. Coincidentally I was in town the week of the race but leaving right before the start. Seriously, on my way out of town I saw them putting up the signs for “REGISTER HERE” at some building. The “Welcome Runners!” signs were starting to go up in all the little shops and restaurants downtown and every day I’d see a few more runners in the coffee shops. 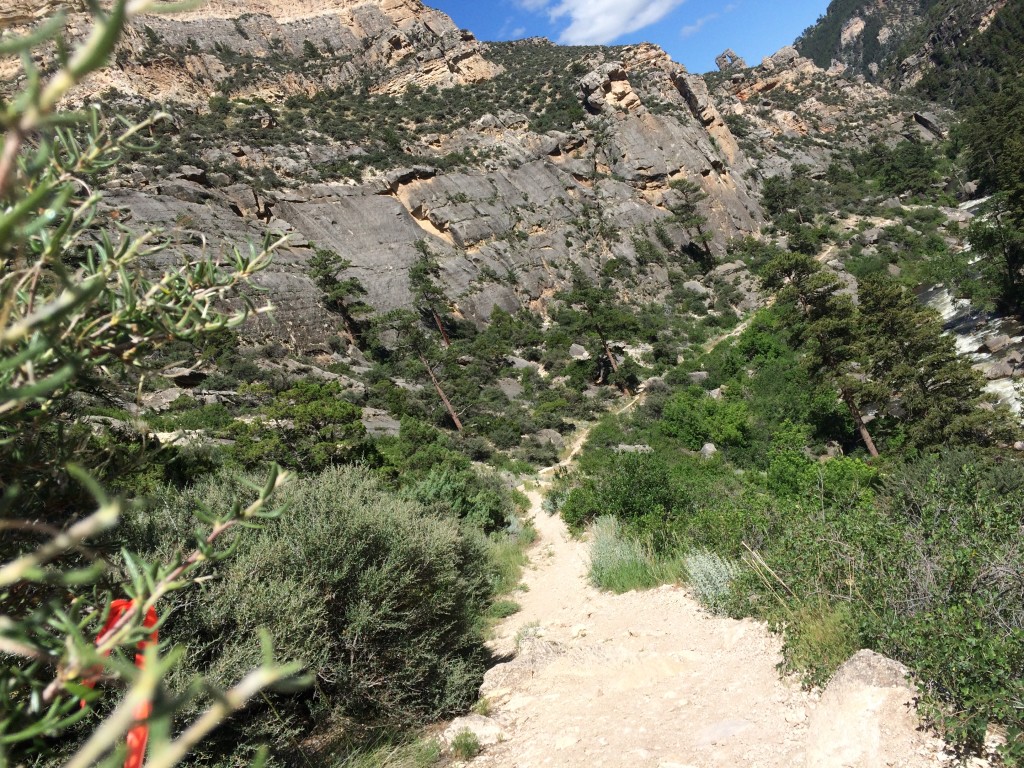 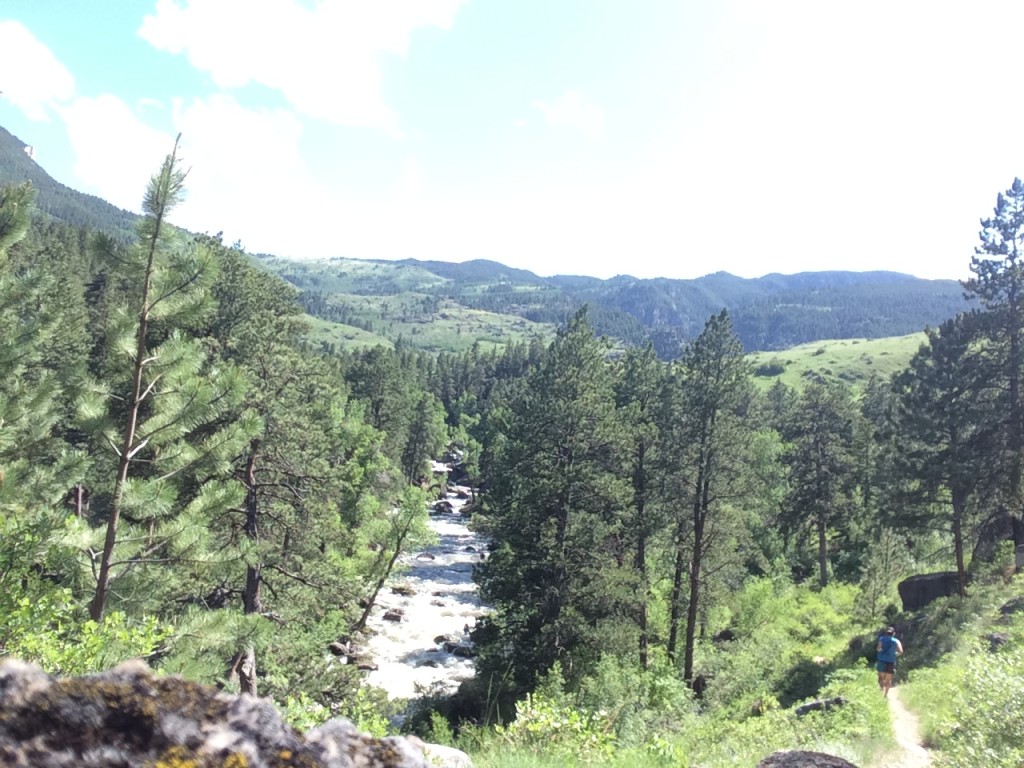 Places I Visited & Would Recommend

1) Remember to bring earplugs & an eye mask next time I go camping. The earplugs will help to fall asleep if there are children playing hide & seek in the campground or if it’s quite windy. The eye mask may help with sleeping in after sunrise!

2) This was the first time I’ve ever spent an extended period of time solo and camping with no real plan. The days feel MUCH longer. I was there for 24 hours and it felt like I’d been there long enough to have to go home already (not a bad thing).

4) No amount of pre-trip local research is as helpful as 10 minutes of asking locals for advice.