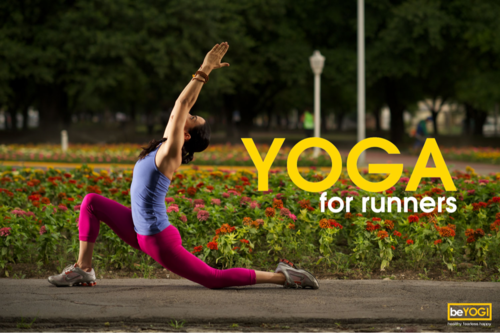 Yoga may be the most common class that athletes attend as a form of cross training.

It is often touted as being useful in increasing flexibility and range of motion. I’m not sure if it actually increased ROM during running (since that’s about relaxation and reciprocal inhibition) and I’m not convinced that more flexibility is a good thing for runners.

Recently I came across an article titled The 5 Most Common Errors Athletes Make with Yoga, and the below quote really stuck out to me:

Flexibility without stability is nothing more than a recipe for injury.

Who says static flexibility leads to a high range of motion while running anyway? You do need to be able to relax the glutes to allow your forward moving leg to move up and at the same time relax the hip to allow the trailing leg to travel backwards. I’m not sure that movement has anything to do with being able to do deep yoga poses.

It should also  be mentioned that it’s been found runners who are less flexible are more economic, because their bodies have to work less to stabilize itself during the run-gait.

Speaking of economics, there’s elastic recoil, or the use of the tendons and muscles as springs to help provide you with energy for forward momentum. A flimsy spring will not have as much recoil as a tighter one.

Just some miscellaneous thoughts on my end, but worth considering I think.