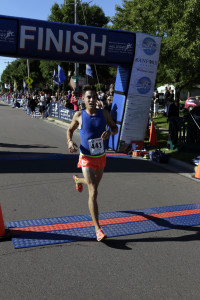 Miles, an athlete of mine from Fargo, was gracious enough to write a race report from his fall Boston Marathon qualification!

Non-runners (and non-marathoners, for that matter) can’t comprehend the ups and downs of marathon training.

Over the last two years (of a three-year running career) I put on more than 3,000 miles trying to get myself ready for a BQ attempt following my first (and only) marathon in Fargo, ND in 2012 (3:17 finish). I followed generic training programs religiously, ran through sub-zero temperatures every winter morning, and signed up for races to keep me motivated only to drop out of four marathons in a row – each with less than a month before race day.

Despite my love for running, I felt cheated and defeated; I was sick of the marathon.

2014 started off with me missing my spring marathon due to Achilles issues. I re-focused on the Missoula Marathon in July for my Boston Qualifier, but suffered from a bout of Runner’s Knee and was forced withdraw less than two weeks out. At that point I made an ultimatum with myself: I’d train for one more marathon, but if it didn’t go as planned I was switching to half-marathons.

Committed to my ultimatum, I set my sights on the 2014 Sioux Falls Marathon on September 7 – the last day to run a BQ for 2015.

I reached out to Kyle in late July with a nagging knee injury, depressed spirits, and less than two months to train. After suffering from Runner’s Knee in years past, I knew that weak hips were the issue and had known for some time which exercises would help. It wasn’t until Kyle put them on my schedule and held me accountable for them that I actually did them.

After a couple of weeks of rehabilitative exercises and biking, I started pounding the pavement again. We hoped I had some endurance leftover from my training for Missoula as I wouldn’t have nearly enough time to build it back up.

Instead of longer/slower runs, Kyle tailored my workouts to keep me near race pace as much as possible. Fast forward six weeks, miles of tempo runs, and hip exercises, this is where I found myself

Actually, before I got to that point, I had to wake up 30 minutes late, scramble to find safety pins, and check my bag. I ended up missing the gun by 30 seconds. In hindsight, I probably should’ve held off to get in a little stretching and a quick warm-up on the football field. But I knew I wanted to be with runners aiming for a sub-3:00 finish. Besides, I’ve always felt warm-ups should take place in the first one to two miles instead of wasting energy before the gun.

I entered this marathon for two reasons.
1) It was the absolute last day to get a qualifying time in for the 2015 Boston Marathon.
2) I expected eastern South Dakota to have flat-as-a-pancake terrain similar to eastern North Dakota where I ran my first marathon in Fargo. Only one of those proved to be true.

Fortunately, the only hiccup that resulted from my hasty start was an untied shoe less than 100 yards into the race (hence the 7:10 pace for Mile 1). Other than that it was smooth sailing. The weather was perfect – ~45°F, clear skies, and calm – at the start.

Remember that part about this being a flat course? It wasn’t. The climbs started after Mile 2. While they weren’t anything crazy (~250 feet), I had intentionally chosen flatter routes during my month of training because I didn’t expect to encounter any during the race and (I believe) my knee injuries were tied to all the hills I ran while training for Missoula. 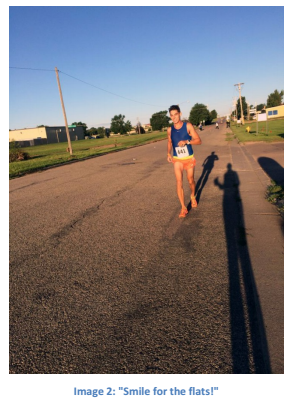 After a few ups and downs through Mile 8, the course flattened out as it headed north out of Sioux Falls. These miles were pretty lonely. The course followed a bike trail on the edge of town, which meant there weren’t many spectators and no need for volunteers to direct runners. Plus, the field was barely over 400 and there weren’t a lot of folks booking along at 6:30-7:00/mile. Fortunately, it was during these miles the sun started peeking over the horizon and greeted us with a warm, BEAUTIFUL sunrise.

Around Mile 15 the course headed downhill towards downtown Sioux Falls. I was kind of surprised at how few spectators there were, but the ones that were present did an awesome job of encouraging runners. Shortly after downtown the course turned back onto the bike trail that ran by the majestic Sioux Falls (which was a delightful surprise). Just look at that scenery!

Sometimes I wonder if the people that choose marathon routes are runners at all. Case in point: The ~200 foot climbs daunting runners from Mile 19 through Mile 22. Why would you do such a thing, race directors? Are you trying to break our hearts? Answer me! Luckily I had a friend waiting for me at Mile 20 with a water bottle and a beaming smile. I didn’t smile back.

After that last climb I started catching the half-marathoners that started 45-minutes after me. And it is here I need to make a quick rant: Run with headphones, that’s fine. But do NOT have them so loud you can’t hear someone yelling, “On your left!” It’s quite frustrating to be 20+ miles into a marathon only to be forced onto grass repeatedly because someone’s blasting their eardrums to oblivion with some new Nicki Minaj song.

Aside from that, the finish was great. The course was flat and crowds lined the streets. I had fun battling with a fellow from Minneapolis (whom I later connected with on LinkedIn and found out his cousin works for the same company as me) over the last few miles. I ended up spurting past him, finishing the last mile at a sub-6:00 pace.

My plan for the race was to maintain a ~6:45/mile pace, which would get me a sub-3:00 hour qualifying time and guarantee me a spot in Boston next April. Because this was the last day for qualifying times, I didn’t want to risk pushing myself any harder than I had to. I’m quite certain I spent 50-75 percent of the race with my eyes glued to the little guy on my watch taunting me to keep up with him. Looking at my mile splits, I’m extremely pleased with the way it went.

I ended up running 2:59 flat and it honestly felt quite easy. The surge at the finish illustrates how strong I felt. It feels absolutely amazing to have a race go exactly as planned (minus the start). Right after getting my medal at the finish line I skipped over to the massage line and waited a few minutes for my turn on the table with other sub-3:00 marathoners. Then, it was off to take my finisher’s photo.