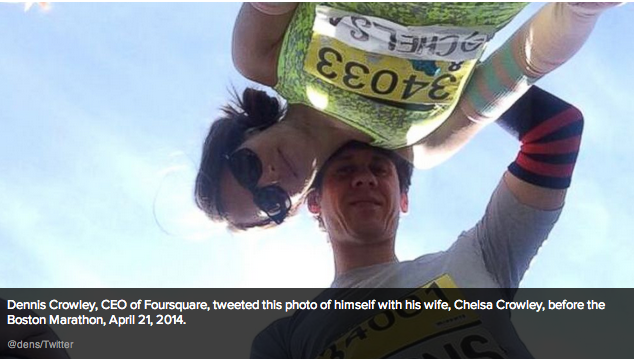 The biggest news to come out of the Boston Marathon is unfortunately not that a US citizen has finally won the race for the first time in three decades and did it in an incredibly fearless manor, it is that there were bandits at the race.

Bandits are people that  sneak into the event without paying. Sometimes they’ll fake a bib or sometimes they won’t even bother. This is definitely robbery if they are taking nutrition and medals away from people that actually paid, it has even gone as far as being called identity theft for those who have copied bibs.

Now, of course I am quite disappointed in these runners who cheated to get into a race that people train years to reach the time standards to just apply to sign up, and not even all that apply get in!

The most prominent bandit is of course Chelsa, the wife of Foresquare CEO. She made the poor decision of putting her twitter handle on her fake bib.

Runners all over social media are being very vocal about how mad, angry, disappointed, or hurt they are in these bandits. And I completely understand, it is definitely wrong of people to steal or cheat their way into a race. It has been going on for years, and I believe Boston has also been fairly accepting of these runners as long as they started after everyone else was through the starting gate. I have no doubt it was the bombing events last year that is making the cheating during this Boston Marathon especially high profile.

However what has shocked me the most is that runners, many of who are talking about how horribly wrong it was of Chelsa and the rest of the bandits to do what they did, are also harassing Chelsa. 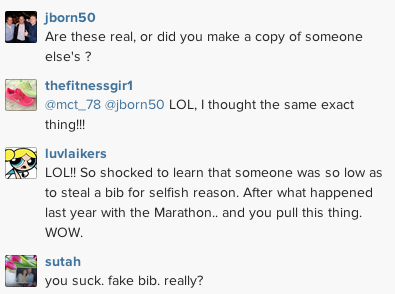 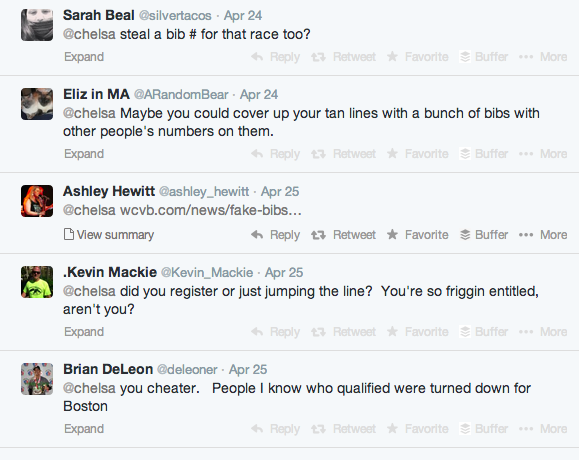 I am in no way condoning what Chelsa or the rest of the bandits did this year or the hundreds+ who bandit races every year. However I am saying that stooping down a level and going out of the way to make Chelsa and these bandits feel worse is not the noble and right thing to do either.

No doubt she is sorry and regrets what she did. Probably both because of the backlash but also I am confident that she genuinely sorry. I see no reason why being cruel to any solves any problem, ever.

Compassion is at the heart of every little thing we do. It is the dearest quality we possess, yet all too often it can be cast aside with consequences too tragic to speak of. To lose our compassion, we lose what it is to be human.