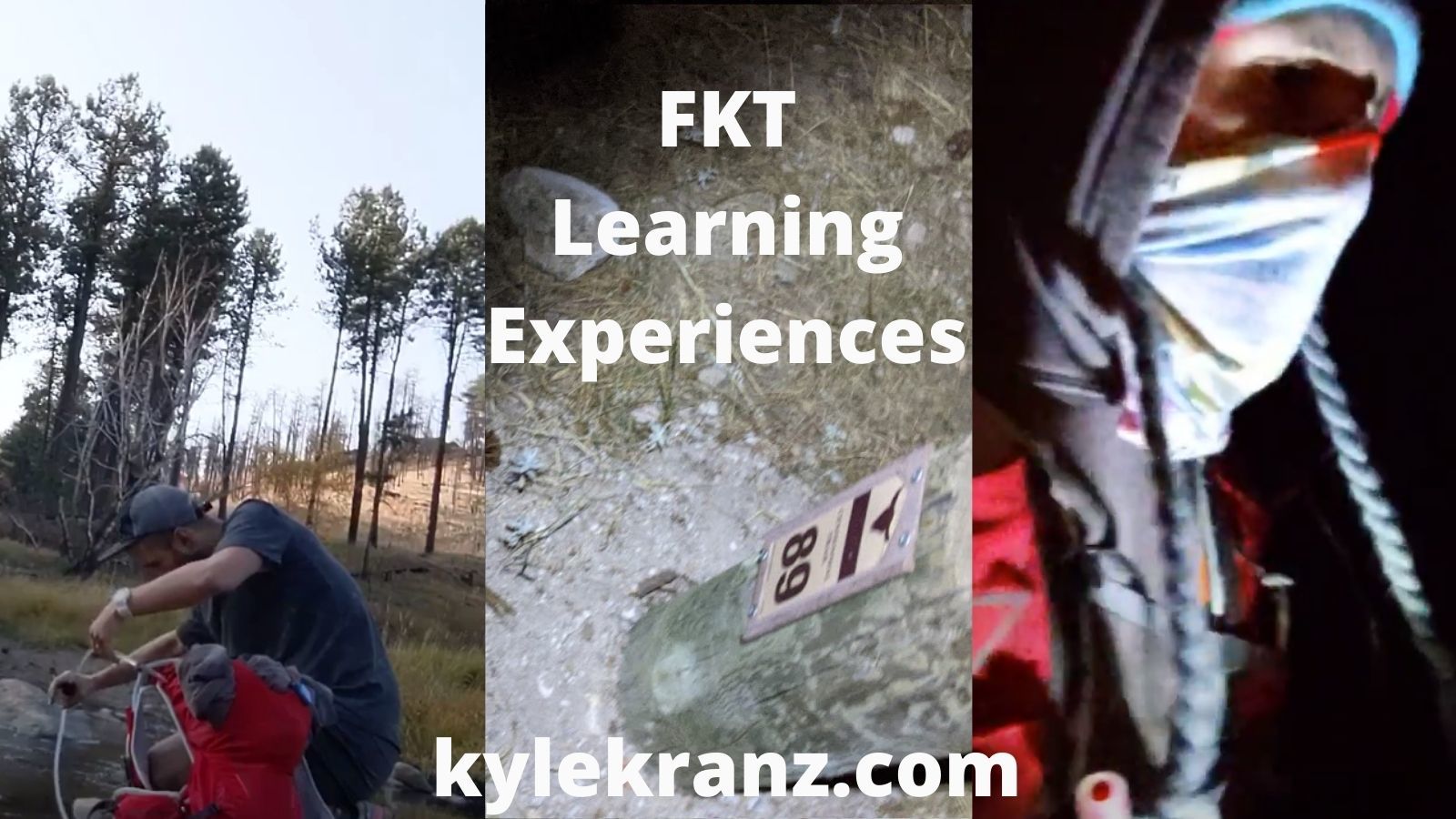 What I learned from my failed FKT

Today you’re going to learn about a few of the mistakes I made on my planning and execution when it came to the 120 mile, 20,000ft elevation gain, trail Fastest Known Time attempt on October 3rd where I made it about 70 miles and nearly 12,000 feet up.

It was an amazing experience and if you’re readying this to prepare for your own FKT please feel free to get ahold of me and I’d be happy to chat one on one about my experience and what I would do differently or suggest for you. 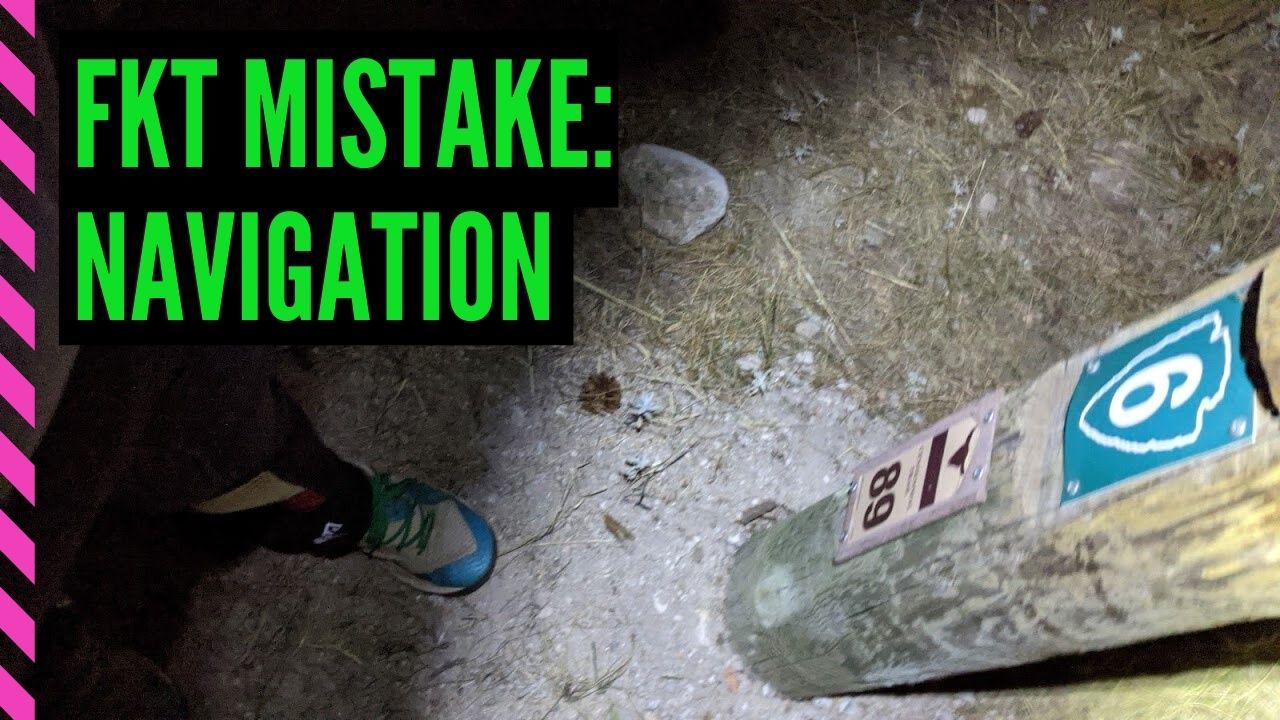 We’ll start with navigation since that ws the problem that reared it’s head first.

During my recovery period between my mid-September marathon and when I was planning on this FKT Desi and I had hiked many of the section that I expected to be covering at night so I would reduce my risk of getting lost, and it worked! However I managed to both miss a turn early on during the first morning as well as have a few instances when I doubled back because I didn’t think I was on the trail or had to take time to determine if I was or was not on the correct path. A few times I even doubled back only to realize I had been on trail!

While I did have access to a great map on my phone for the entire duration, you don’t always look at that until you feel you need to 😉 These repeated navigational errors not only added time and steps to my trek but also took a mental toll that added up. If I were to return I’m confident I could easily navigate every section my memory and save a great deal of frustration. 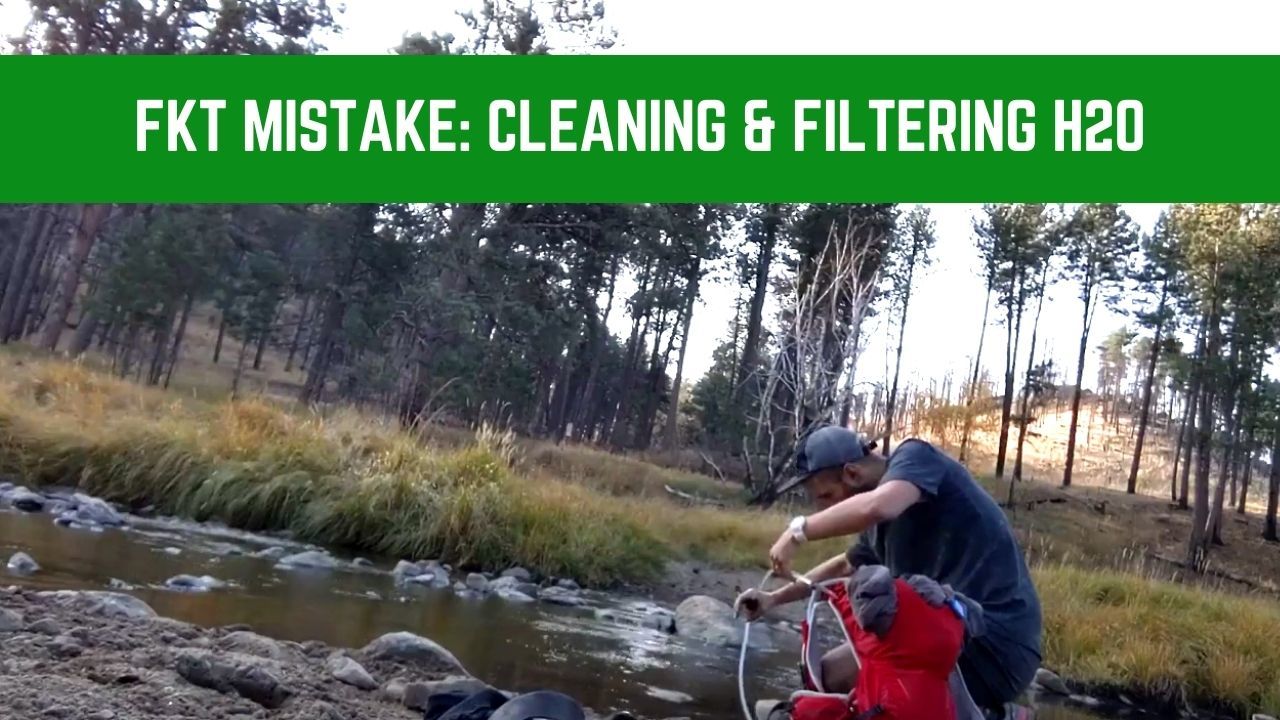 I suspect you’ll get the sense I had a lot of learning experiences and I went in to this with some ignorant bliss, without a doubt.

Water and food was also a problem. The water wasn’t actually all that bad and was only exabberated by the freezing temperatures, but I’d probably consider a different means of cleaning my fluids.

But food.. oh boy food. I don’t know if I’ll ever eat another Clif Bar in my life. I had a good variety of bars, I think three different types of Clif Bars and a few different flavors of each as well as a small amount of other brand options and they were all just horrible. After the first few hours I hated every single dry chew choking bite. Not only was eating another bar the last thing I wanted to do but I suspect I packed too many calories and they simply took up a great deal of space and added a lot of weight. This being my first unsupported ultra I didn’t now exactly what I was going to want or need for calories and I certainly wanted to have a bit too much than not enough… and it was certainly too much!

The gels on the otherhand were perfect. If I were to repeat this attempt I’d absolutely pack more gels and more of the heavenly seitan jerkey from Primal Spirit. Those things were simply magic in my mouth and 100% the best thing I ate during that entire endevour. Gels are far lighter and easier to eat the bars and I’m glad I did pack the ones I did. I also may or may not have picked a gummy fruit off the trail at once point and ate it. Not proud of that one. 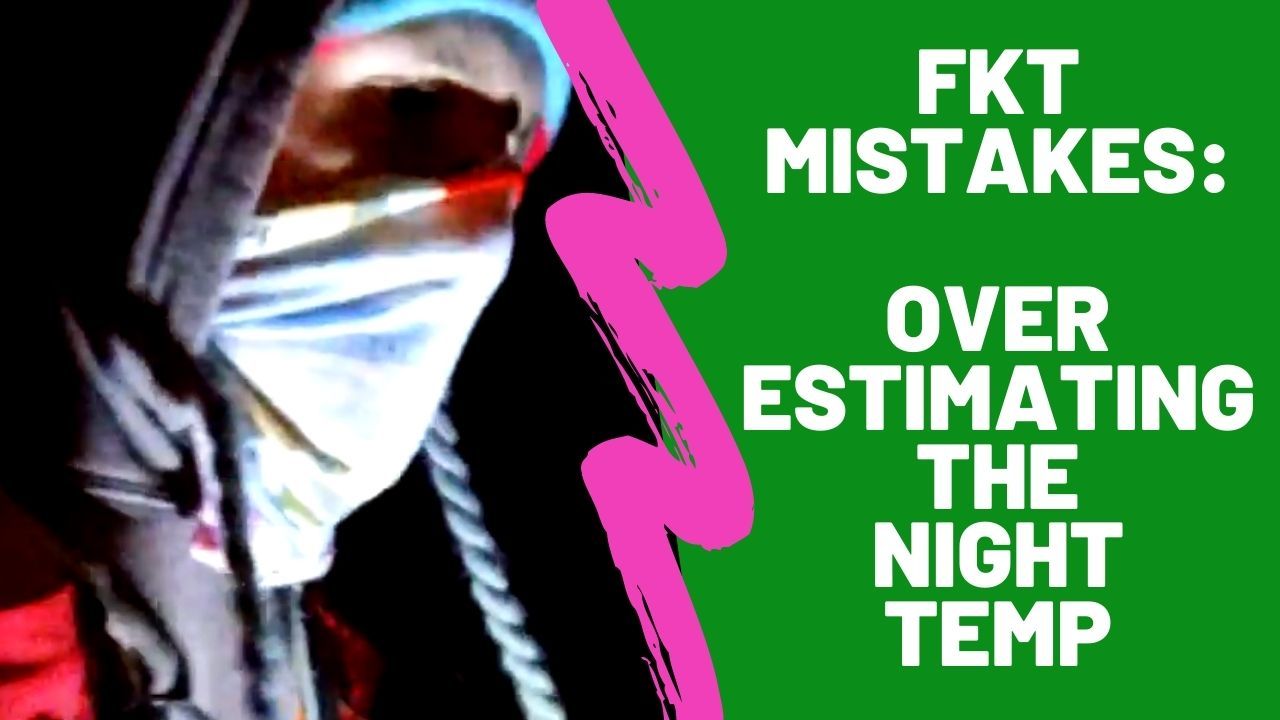 The temps were also a major problem.

Leading up to the event the lowest low I saw was 38F yet it dropped to 27 at once point!

Thankfully outside of my glove-mitten combo I had tights, a very warm hoody, a buff, and a stocking cap, but my hands were practically useless for most of the evening and if I were to stop moving for even a moment I would start to shiver. I was not planning on actually sleeping outside of a few naps but the cold made napping darn near impossible until I starting actually falling asleep while hiking and I laid down in the middle of the trail once and slept for a few minutes before I woke up shivering.

My fellow FKTer, Lance, who started a couple hours after me and ended up regaining his name as the FKT leader after losing it earlier in the summer tried to take a nap in a vault toilet but found the floor too cold and continued on. 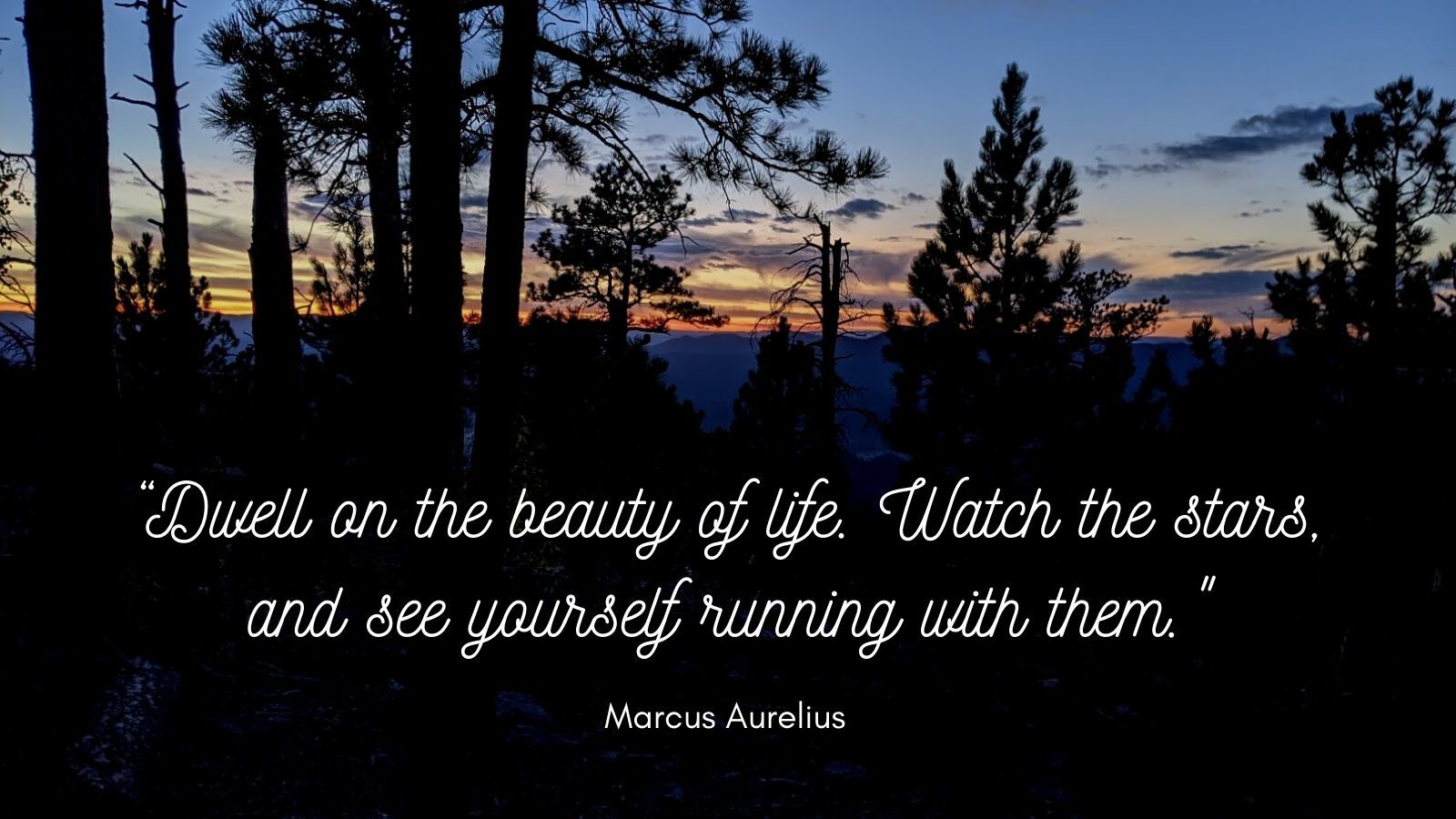 While it didn’t even occur to me that I would not finish and I certainly made plenty of newb first time FKT mistakes, it was incredible. Being out all by myself seeing and hearing elk at dawn, bison in the morning, walking through postcard like autumn settings and one of the best sunsets I’ve witnessed, being absolutely alone and hearing howling coyotes and feeling the support of friends and family all came together to make this an experience I cannot and would not take back.

It has even occured to me that I may be moreso or at least equaly has proud of myself to having made it as far as I did and through as much struggle as I experienced than if it had been easier and I would have finished. It’s through struggle we grow and I certainly struggled. Sometime I think many of us have learned over this year with a lack of events to actually participate in is how important the journey is, and if I consider this part of the journey and not a failed event, it was as big of a win as I possibly could have imagined.

So thank you for being along on this journey and I’ll see you on the next one.