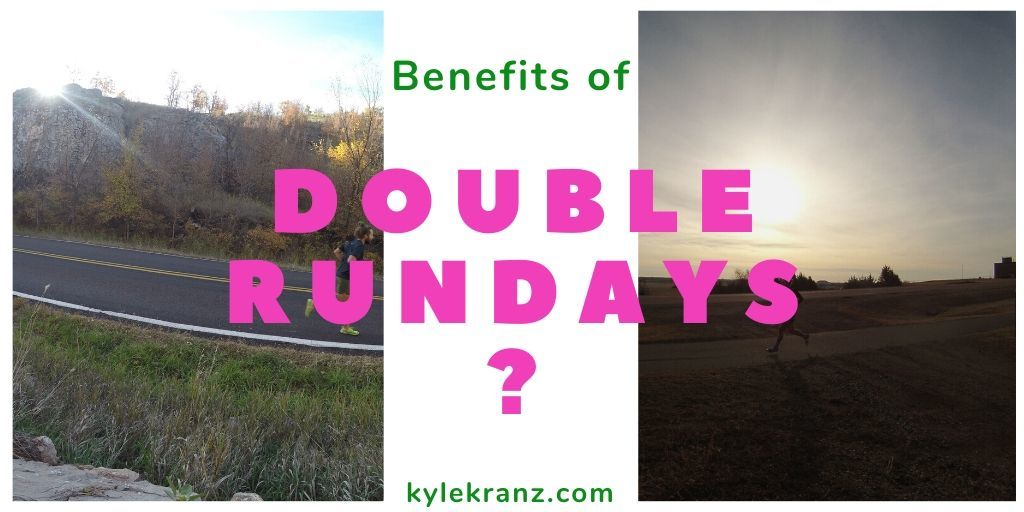 Coach Kyle here and today you’re going to learn about a “hack” that can lead you to some big running gains!

Have you ever thought about planning double run days into your training? Thought maybe you were not running enough to warrant them?

Let’s go over what they are, why they’re beneficial, and most importantly if you should do them or not! 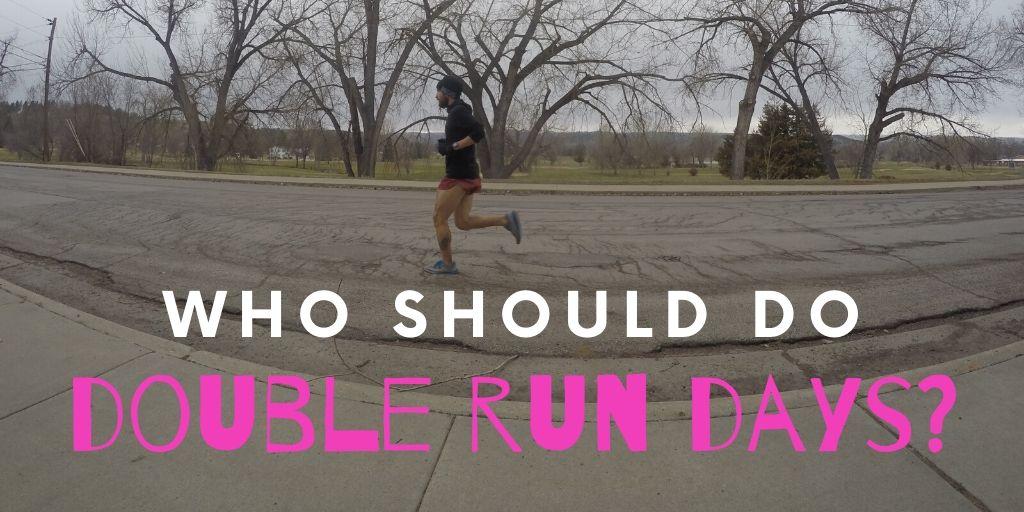 What are Double Run Days & Who Should Do Them?

Running twice during a day is both one of the most beneficial things a runner can do for their fitness but also one of the most difficult training tools to implement due to the time commitment.

Generally, double days refer to the practice of going out for a second 30-60 minute easy jog 3+ hours after a morning quality session. You’ll see in the following video that outside of the single individual long run, Mo Farah runs twice every other day. The reason is that even as an elite runner there’s no feasible way he could do 120-130 miles per week off of single runs. That’s just too much at once!

The opinions on who can or should do double days will vary quite a bit. Malmo of LetsRun, who was at a time the American 3,000 steeple record holder, says you can benefit from doubling even at 30 miles per week and other coaches suggest it’s not worth it until you’re at 60 or even 75 miles weekly. My coach, coach of elite runners including a US indoor HS mile record holder, has me doing double days at high 50’s / low 60 mile per week early on in a marathon campaign.

I think as you’ll learn, anyone of just about any fitness ability can benefit from two training sessions in a single day.

There are a number of reasons to perform two workouts in a single day. Before we get into the science of it, the basics are that the practice lets you run more miles more comfortably and the physiological benefits are numerous but know that double days simply make better runners.

Muscle glycogen is the storage form of carbohydrates, a key running fuel source. It is stored with water in your muscles and used during exercise at non-maximal efforts. When your brain senses that your onboard carbohydrate stores are near depletion you may hit the wall or bonk. This is a protective mechanism of the brain to shut you down before you actually do run out of fuel.

Studies looking at training once vs twice in a day have found that time to exhaustion, resting muscle glycogen concentration, and citrate synthase activity were all enhanced. Citrate Synthase is the first enzyme in the kreb’s cycle, which is series of chemical reactions that releases energy that all of us had to memorize in exercise physiology classes. Doing a second run for the day in a glycogen depleted state may be a great way for the body to actually enhance muscle glycogen storage ability.

Another benefit of double run days that is more tangible is many runners find it an easier way to increase their mileage over a week or month than running singles. You simply may find it easier to run (for example 8 or 9 runs of 6-7avg rather than 6 runs of 10 miles average. And as we know, running more volume and more frequently is simply one of the best way to improve your running!

Joe Friel’s statement about daily doubles in The Cyclist’s Training Bible even mentions sleep!: Sleeping and working out have a synergistic effect on fitness: Each can cause the release of a growth hormone from the pituitary gland. Growth hormone speeds recovery, rebuilds muscles, and breaks down body fat. By training twice daily and taking a nap, the dedicated rider gets four hits of growth hormone daily, resulting in higher levels of fitness sooner.

Legendary running coach, Pete Pfitzinger has changed his mind on doubles, suggesting that:

I now believe that for older runners, or those with a history of injury, double runs can be a beneficial way to run relatively high mileage with less injury risk than longer single runs. Doubles can also help you improve your stride rate and running technique because you’ll be relatively fresh during your runs and less likely to get stuck in a marathoner’s shuffle. I would now recommend double runs for runners over 40 preparing for races from 5K through the marathon any time except their long run day. 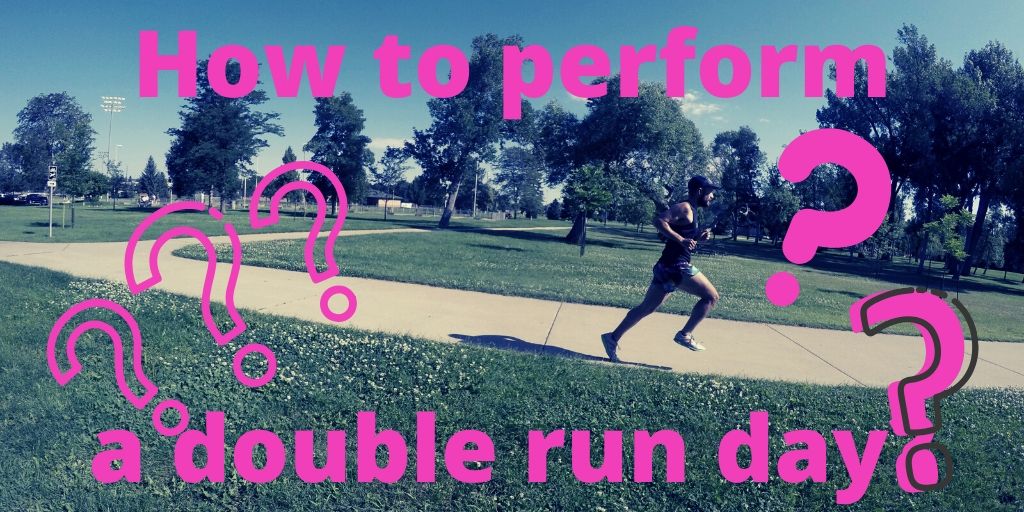 How to Do Double Days?

We know they’re beneficial, how do we go about doing them?

Anyone can benefit from double days, even runners who are running a small amount of hours weekly. Just because it’s more typical for elite runners does not mean average athletes can not benefit from it.

The most simple method would be to do a second training session 2+ hours after an earlier one.

With myself, I tend to save them for the hard days. I’m a big believer in keeping the hard days hard and the easy days easy, thus I try to limit leg strengthening and excess mileage on the easy days. Typically I’ll do a 15 to 30 minute very very easy jog 2-3 hours after a morning workout, however it could be that I do it even later in the afternoon or evening.

If your mileage is at a level where you should likely not be adding any more or you simply cannot get more miles in due to time availability, it could be an option to do some other sort of non-running cardio, such as cycling, walking, hiking, elliptical, etc. Maybe you can get a morning run in but can’t get away from the house in the evening due to childcare, but you an elliptical or stationary bike at home! Remembering what I said earlier about part of the benefit of double days being training in a glycogen depleted state, it does not have to be a run!

Another “hack” would be to not actually do two runs in a day, but do one in the evening and the next one in the morning.

If you perform a hard or long run at, let’s say, 8 pm and go back out at 6am before work for an easy jog, your glycogen is still going to be lower and your muscles may still be a little more fatigued than if you had a full 24 hours between runs instead of 9-10 hours between runs. While it may not be quite as big of a benefit as two runs two hours apart, the benefit still may be there! I’ll often do this to actually have more recovery time between my last easy run on a Monday morning (vs afternoon or evening) and the next workout Tuesday morning, as well. I feel it just lets me go into it with slightly fresher legs.

So there we have it.

If you can manage, it cannot hurt to throw in 1-3 double days weekly.

The most important thing is that it does not have to be a second run! I would suggest that heck, even an hour walk during a beautiful sunset with the dog would offer you some sort of physical training benefit – and yes, let’s not neglect the mental side of a nice evening walk or bike ride, eh?!

In my case, even as a coach, I’ve known about the benefit of double days, yet I’ve rarely up them into practice. The activation energy is just just too high even for me. Yet now that I’m again working with a coach who is holding me accountable, I’m doing them and I’m confident I’m going to be a stronger runner from it!

The way I’ve seen it, you have two choices. You can decide to remain where you’re at or make a decision to improve further.