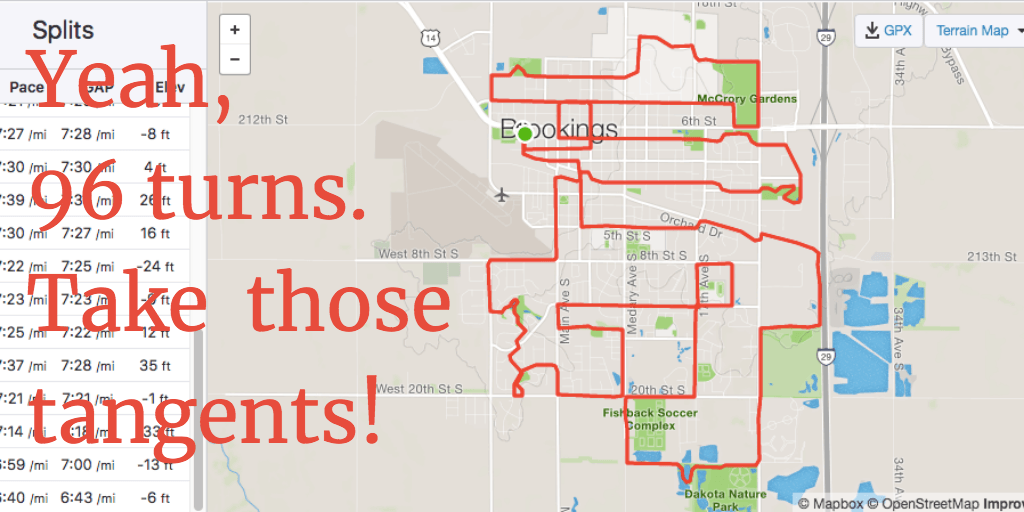 I was not planning on running a spring marathon, but was instead hoping to focus on 5k to 10k distance events. I had been pretty consistent with one or two weekly workouts of 3-6 x 1k or 20-40 minutes at ~7:00 pace tempo runs as well as some easy jogs. I probably averaged 30-something miles per week so far in 2019 since I’ve just not been doing any regular long runs.

My first race since last Thanksgiving was a 4 miler in April, not quite at best effort, that suggested a 3:04 marathon equivalent. But of course, with no plans on doing a spring marathon, I had had not run over 90 minutes at once in 2019!

A client I coach had a good marathon at Manchester but didn’t know she wanted to do a May 11th marathon within a few weeks of Manchester. I told her, not expecting her to say yes, that I’d pay for half her Brookings entry if she wanted to transfer it. I was out for a group trail run that was about 1:40 in length, I got back home and saw she had transferred the bib to me, so I went out for another 1:20 that evening for the start of my marathon training with about four weeks to go 😉

I kept up with 1 or 2 midweek workouts and did a couple 15-18 milers. Two weeks out I had a little quad scare. Last spring I did my second marathon, the Colorado Marathon, and was on sub3 pace through 16 but my left quad got so painful that I ended up dialing back and just jogging in a 3:23. I took most of that week off, tested it on Thursday and was at 9.9/10 so on the Saturday, 7 days out, I ran 13.1 at 7:26 pace. It was a very very comfortable effort, the quad was 9.9/10 during and after, so I felt confident I could run 7:20-:30 pace for the marathon.

I have actually only run two stand-alone marathons before this last weekend. Brookings in 2011 was my first with a 3:19 and Colorado last spring was a 3:23. The 3:19 was my first and the 3:23 was pretty bad run with my quad injury, so my only goal was to just get a PR but I had a 7:30 pace as my main objective.

Friday morning my wife and I went to a restaurant and split an omelet and a cinnamon roll. I had purposefully tapered my coffee intake since Monday and had a tiny tiny headache off and on Friday. Nothing that really bothered me but if I wasn’t actually doing something I could just barely feel it. I drove ~6 hours to Brookings on Friday, the day before the event. Listening to the Tarken Star Wars audio book helped the drive go by very quickly. I arrived in the early afternoon and volunteered as a corner marshall for the 5k.

I took a second roll for the drive and drank 2/3rd gallon of orange juice throughout the day to get some low fiber calories in. My parents drove an hour from my hometown and we had lunch on Friday, I had a vegetarian pita with fries. Dinner was a small bowl of pasta and desert was a smore thing cooked in a cast iron skillet.

I was staying with a friend, Skyler, and his brother (plus two sisters who were doing the relay) so we played Kings on the Corner and Exploding Kittens before going to bed.

Skyler and I went for a shakeout mile at 5am and then walked a quarter mile to a gas station for some coffee. I ate a PB&honey sandwhich at 5 and 6am. A couple minutes before the 7am start I had a Science in Sport isotonic gel.

The conditions could not have been better. The start was in the 40’s, the course only changes about 100 feet, it’s very curvy with nearly 100 turns but that means no sustained headwind. I wore short shorts, a singlet, and gloves.

If you visit the gear image you’ll see my calories. I drank the Maurten during the first 40 minutes and had a Maurten gel at 1 hour. Over the next 2.25 hours I ate the six other gels and two GU that I grabbed from an aid station bringing me to about 300 calories hourly.

There was a new experience for me where I grabbed some water from an aid station and was trying to take some GU with a bit of the water, but the GU had other plans. It went up into my nose, I wasn’t sure what to do, so snot rocketed vanilla bean GU!

It ended up being perfect!

Easy around town with the half marathoners. I had short shorts and a singlet on. It was nice to have gloves for the first half, I took them for for a few miles midway but put them back on for the final 10k.

After the half marathoners split, I basically ran the rest solo.

I was terrified of being bored to death during this section and almost brought my phone with for music just for the last 16 miles, but decided against it mainly because my Flipbelt was full of gels! But thankfully I never needed it.

The main pacing strategy for the first 20 was ‘slow down’ because it was a very relaxed speed. For me, the distance was the challenge since I’d not been doing any long runs.

My legs felt well. With my main concern going in being my left quad, I was pleased that there was absolutely no problem with it. A few days later now, still nothing 🙂

During the final 10k there was a bit of fatigue but that was just for being out running for 2.5+ hours. I switched from ‘slow down’ to ‘don’t slow down’ as my pacing strategy. My hammies got a bit tired during the last 10 miles but never so much that I thought there was any good chance of cramping/etc. Funny enough the day after the run my hamstrings were fine and my quads had DOMS.

Afterward, I was a bit stiff but overall a-ok. Probably the best I’ve felt after a long distance race. I certainly owe that to the conservative speed.

How to PR with no Marathon Training

Only have run two marathon, one being your first and one having an injury, and running smart for the third attempt.

Six months ago, if I was going to do a spring marathon, it would have been the Fargo ND Marathon this upcoming weekend. A friend of mine is going and wants to run a ~3:12. After Christmas, I decided I just wasn’t feeling like marathon training over Jan and Feb so decided to not do a spring marathon.

Well, being gifted one and running very well at it inspired me to sign up for Fargo this upcoming weekend!

Since I had my perfect spring marathon, I’m just going to run 7:20 pace with my friend for as long as I can. I’ll back off before I feel the need to, so I don’t expire. Maybe I’ll run 16 miles with him or maybe I’ll run 26.2 miles with him and get a second PR. I’m mainly going to have fun, support him, and have fun. If I decide at mile 22 that I can’t hold 7:20 pace anymore, I’ll start drinking beer.