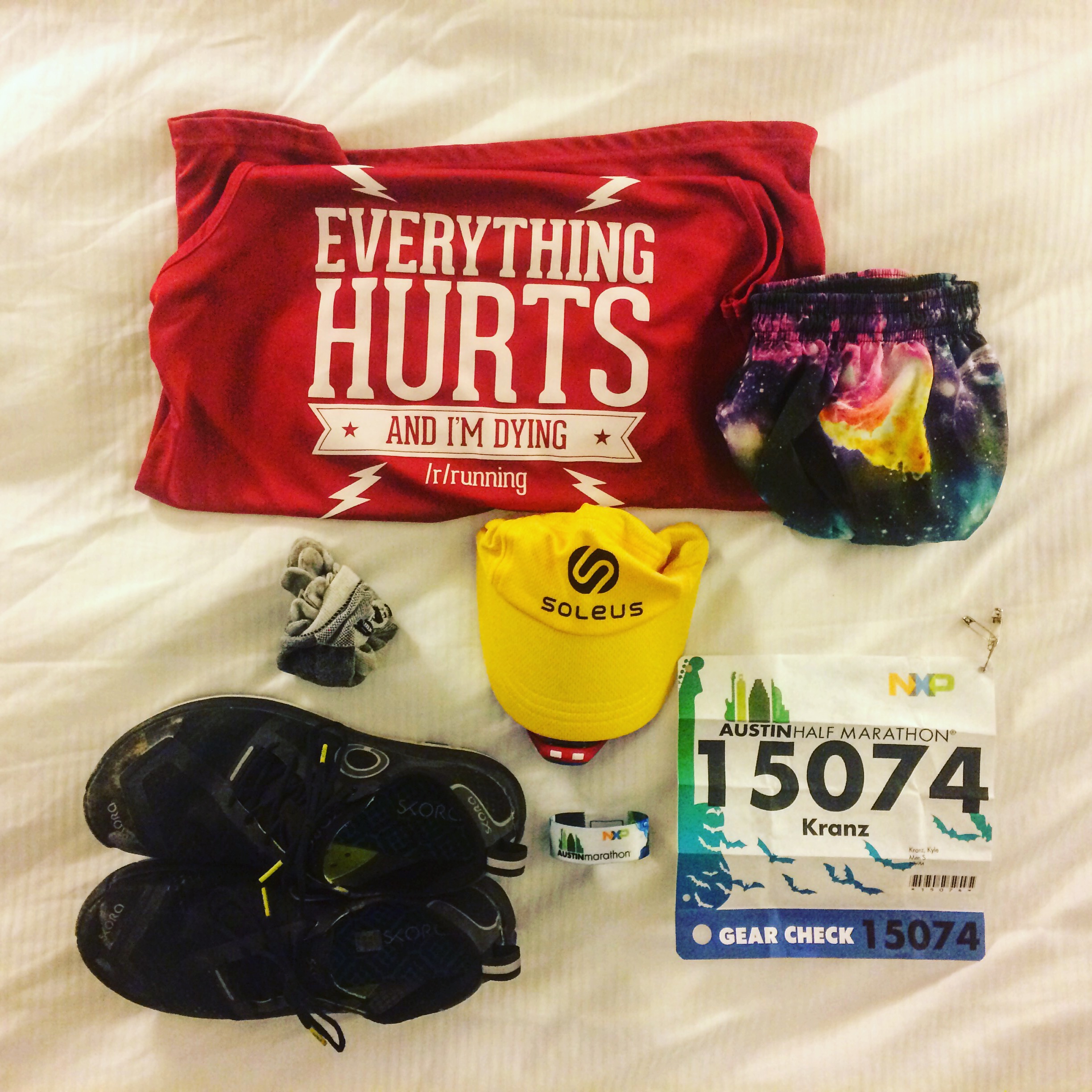 First off, thanks to Soleus Running for gifting me the race entry with the extra VIP signup (I’ll explain more later) and my athlete Sarah F for gifting me hotel points for the Hilton! I’d not have done the race without Soleus and I’d have stayed in a cheap hostel if it was not for the Hilton point donation! 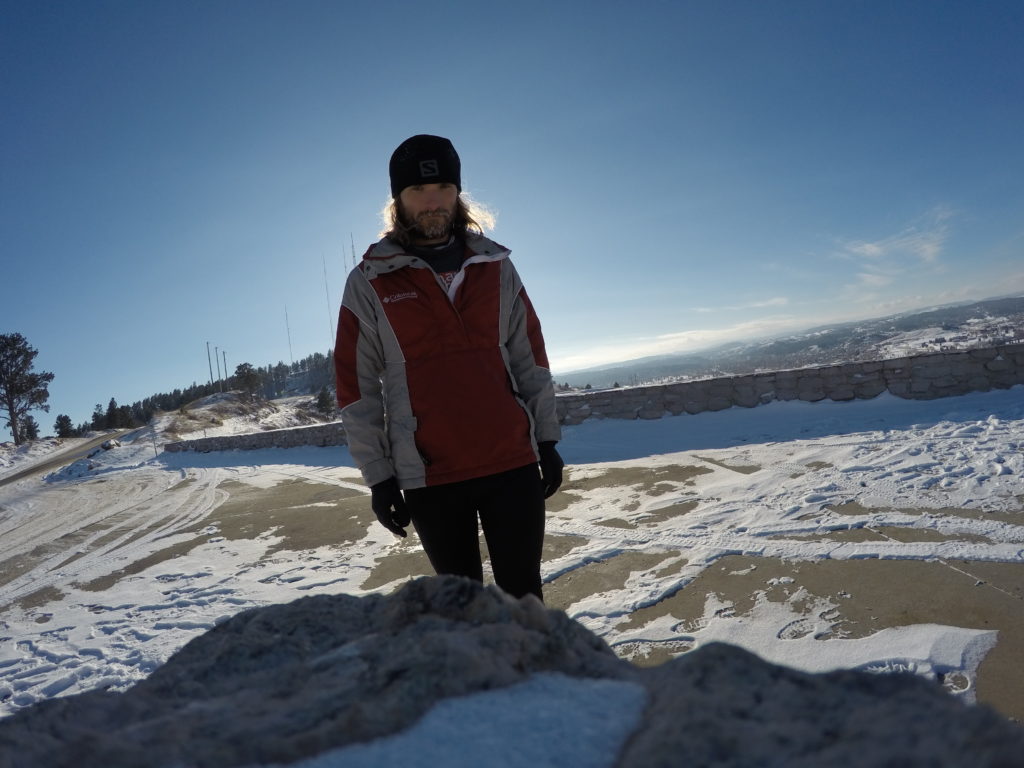 Training: This has gone as well as it could during the South Dakota winter. I’ve ran more mileage than I’ve ever done, averaging 62 miles per week in the last 2.5 months (I averaged 52mpw in 2016). Workouts on clear/flat pavement were few and far between, so I had almost no workouts to hint at my fitness level. I’d ran 100% outdoors on hilly roads that are best cleared of snow/ice or crappy pavement that was not safe for fast running. Almost all in tights and winter gear.

I did have to take a few weeks with reduced volume + no hard running in early Feb due to illness and the taper was much much easier than I otherwise would have done because my left calf had been a little achey off and on in Feb. Race week it drastically improved and thankfully as of writing this it’s 99% fine. I actually didn’t even think about it during the race, at all 🙂

Getting to Austin: I flew in to Austin from Rapid City on Thursday. The flights were super smooth and nothing happened during travel to really mention. It was nice getting to Austin in the early afternoon!

Lodging: An athlete I coach who stays at hotels for work and gifts the points to friends (because the last place she wants to stay on vacation is a hotel) provided me with five nights at the Hilton. Her hotel booking gave me access to the Executive Lounge, which made me feel super spoiled. Food and drink available all day! The only food I purchased was two donuts from Voodoo. This Hilton was also literally right across the street from the race packet pick-up and only a few blocks from the start/finish. Location could not have been better!

Packet Pick-Up: This was a nice expo, plenty of various booths to check out. There was also a booth scavenger hunt where if you go to them all you get put into a drawing for some swag and a free entry. Getting my bag was super easy, no complaints here.

Goals: Initially my goal was to PR with a sub 1:23:10. I knew it was a harder course than what I’ve done, however,  I’d ran within 1 and within 20 seconds of my PR in 2016. I hoped that with additional training (and mileage) I’d be able to PR on a more difficult course.

Austin: It was nice and cool when I arrived in Austin on Thursday, however that quickly changed with an 80 degree day on Saturday and a very high chance of thunderstorms on Sunday race morning. My goals shifted from a time to simply run conservatively, not mind the pace, and see what happens. I’m only going to run as fast as I am going to run, and with it being 70 degrees and 90% humidity at 5am on race morning, I was certainly not going to run with a goal pace in mind. 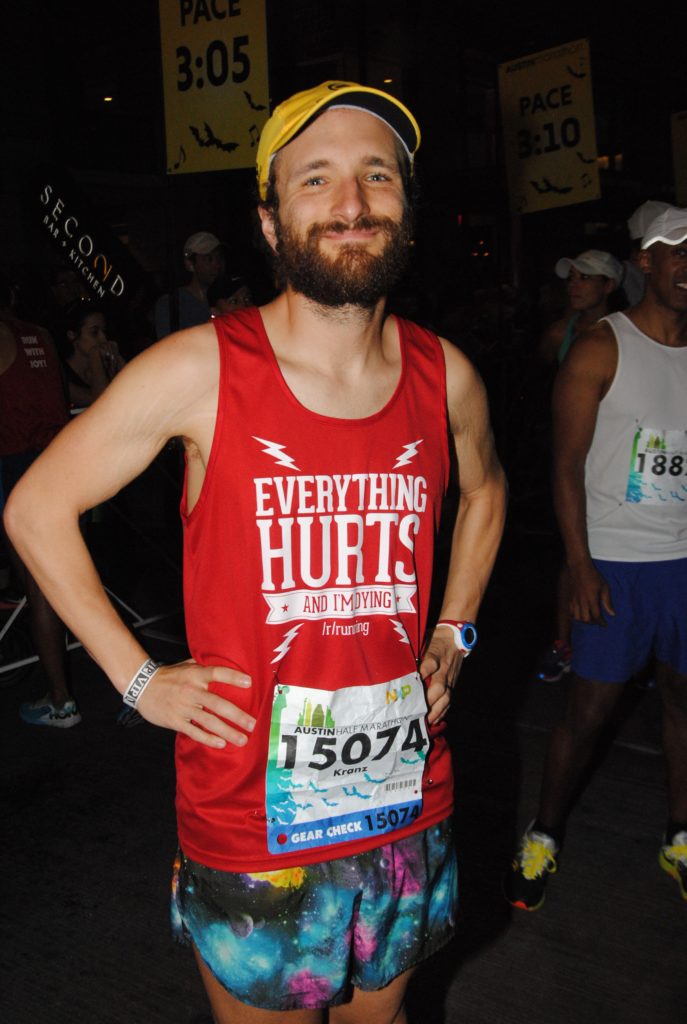 Waiting around for the start.

The Race: We’ll break it up into 5k chunks, since there were timing mats every 5k on the course.

0-5k – I started super super slowly with my mouth closed for the first half mile. With it being hotter and more humid than anything I’ve ran in…4-6 months I knew I needed to hold back at the start. The marathoners and the half marathoners run the first 10 miles together and I even let the 3:00 and then the 3:05 pacer + group go off a bit ahead of me. I was clicking off super easy 7:05’s for the first uphill 3 miles at came through 3.1 miles in 118th position for the half.

5k to 10k – The course turned downhill at mile 4, at which point I moved to a more moderate effort level. By 10k I was in 67th place and had cut my average pace down to 6:45. Thankfully the sun never came out so it was just hills and humidity to deal with. 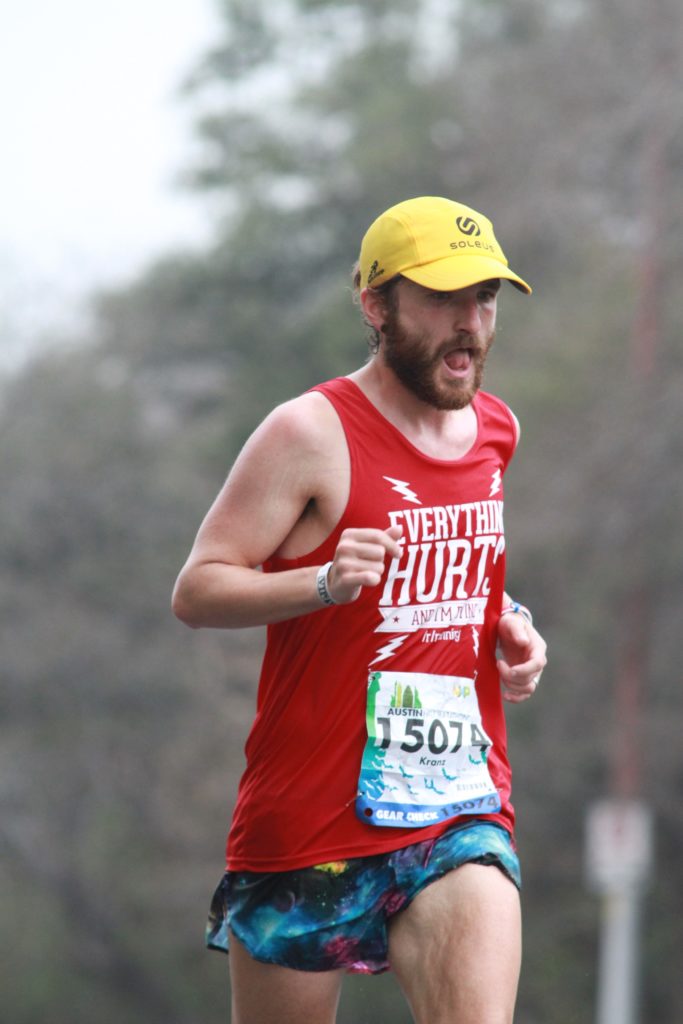 10k to 15k – This was still a net downhill and I continued to speed up a bit, dropping my average pace a few more seconds per mile and passing another 19 runners. I think the only person to actually pass me after mile 4 was a much faster athlete than I who was having to stop at portapotties due to GI issues. He actually passed me twice, presumably after I passed him twice while he was in a portapotty each time.

15k to 20k – This was where the road turned up again, and boy they really cranked up the incline! I was warned about these and they lived up to expectations. At the start and here in the final few miles I would let nearby runners go off ahead but would catch up to them at the top and going down. I had no desire to maintain pace up a hill to simply expire at the top. Constant effort but fluctuating pace. Well, constant until the final 5k 😉 Those last few really short but steep hills are steep. 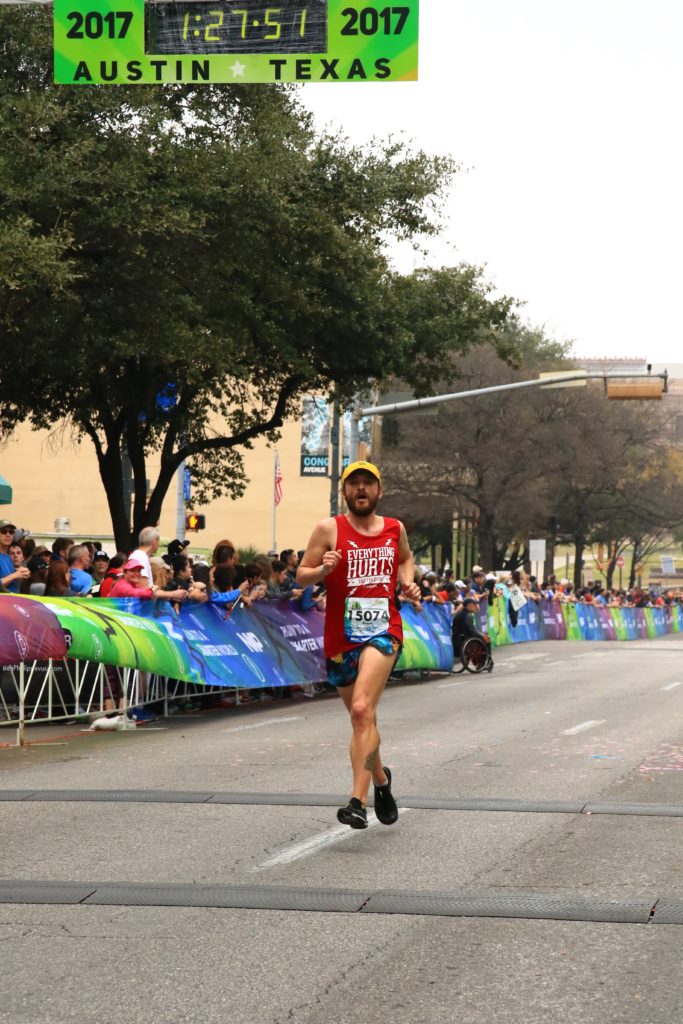 The Finish – I shifted to “best effort” for the final couple miles. Still being conservative on the hills but pushing it. I think I passed 7 runners in the final stretch. 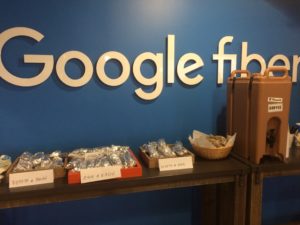 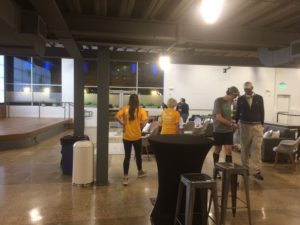 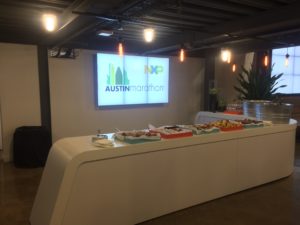 Austin Marathon VIP: For $175 extra on your entry you receive some nice extra accommodations. The first of these that I took advantage of was the free cap from Greenlayer, who I believe was doing all of the race apparel. It’s a nice cap, I like it. We also received 20% off at the Greenlayer booth, but I did not need anything else.

The VIP pre-race lounge was at the Google Fiber Space less than a block from the start. Here the VIP’s had their own drop bag, breakfast, coffee, and I got to chat with some cool fellow runners. The regular dropbag location was a good 4-5 blocks away, at the finish. It was also nice to have our private and real bathrooms!

Post race, the VIP Lounge was on a balcony overlooking the finish + the hall. See the panoramic view below. It was cool. There was a table with coffee and tea + items, a table with various juices, and then two breakfast food tables. I just had some coffee and fruit after the run, but I came back later and ate a full tasty breakfast 🙂

Is VIP Worth it? Let’s see. The cap + massage would have been $25 and $20. $10 for pre-race coffee and a couple pastries, $20 for the post race coffee and filling breakfast. I would not have purchased any cap, massage, and the coffee/food would have been free for me but I would have had to go back to the hotel. But with those, that’s $75 in just straight up money. $100 extra for the convenience? That is up to you. It’s nice to feel special and to have private bathrooms, private places to chill, private massage, etc. If you’re up for gifting someone $175, this would be a really really fun gift for someone you know who is running the Austin Half/Full marathon!

Other Things About Austin: 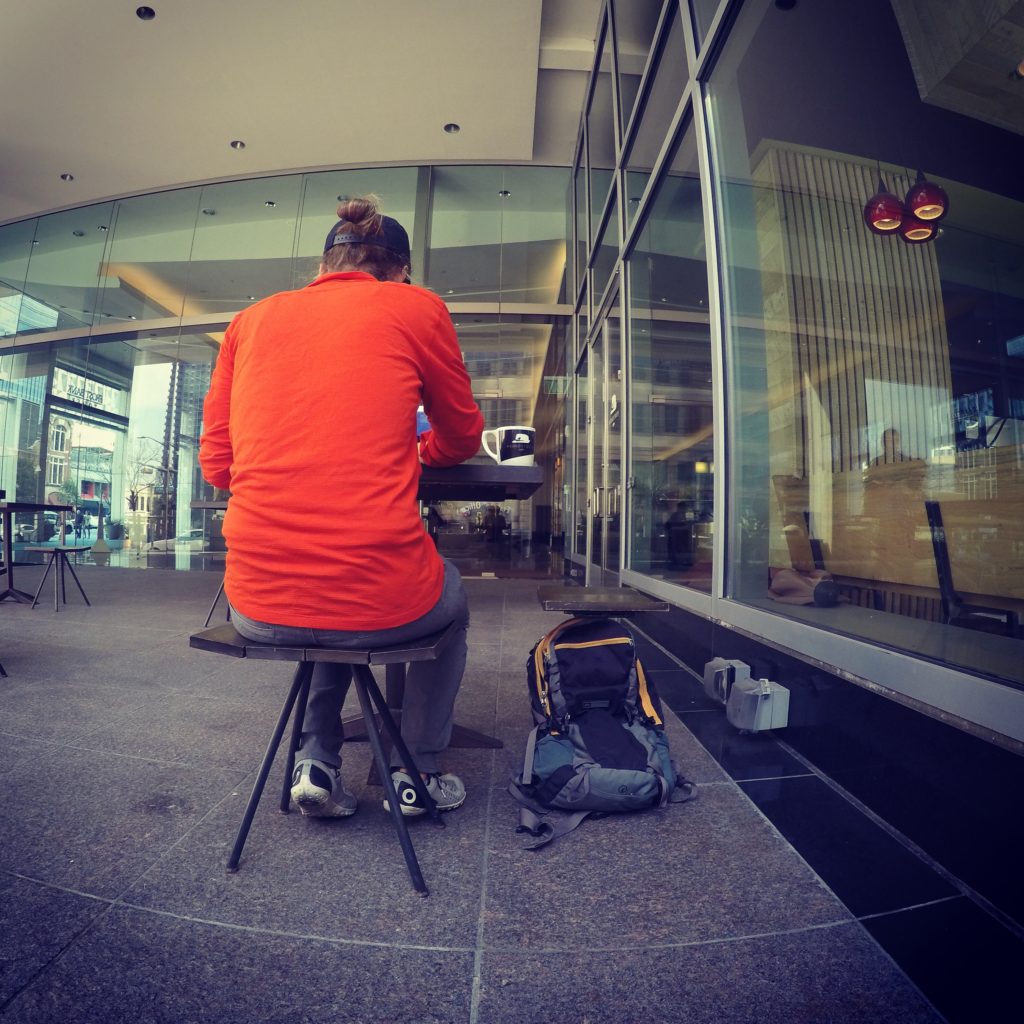 When I travel I usually just live mostly normal, since I work from my computer. As you’ll see from the photos below I did some exploring, but typically doing what I’d normally do. 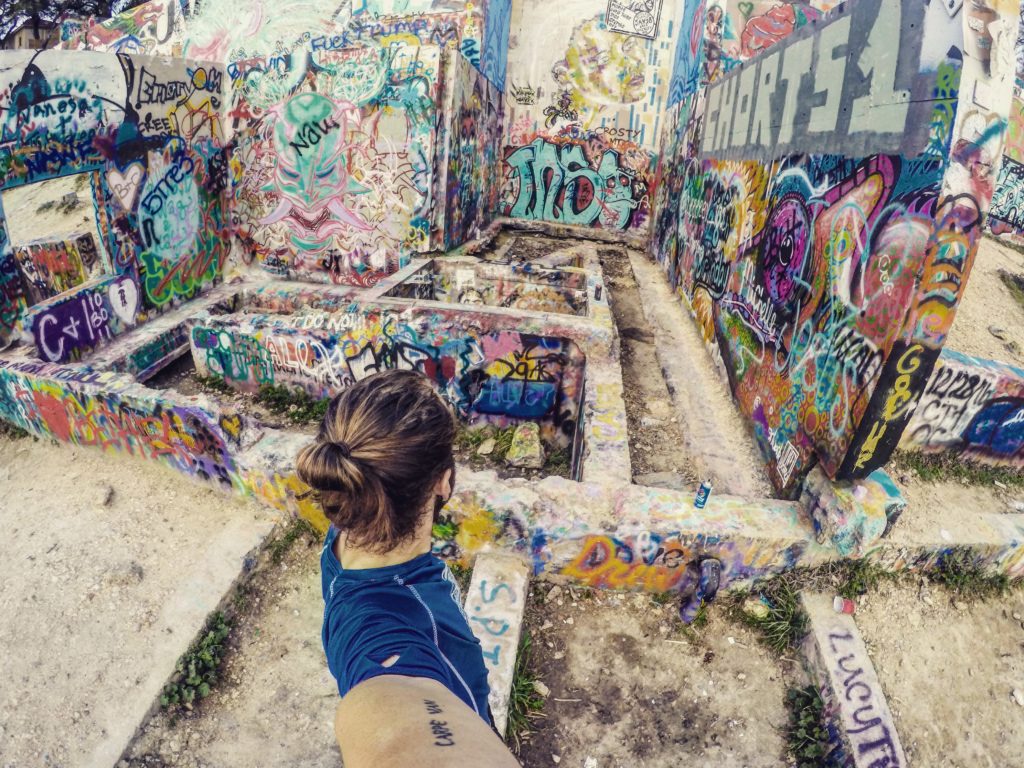 Each day I tried to see one touristy location within running distance of my hotel. This was Graffiti Park. 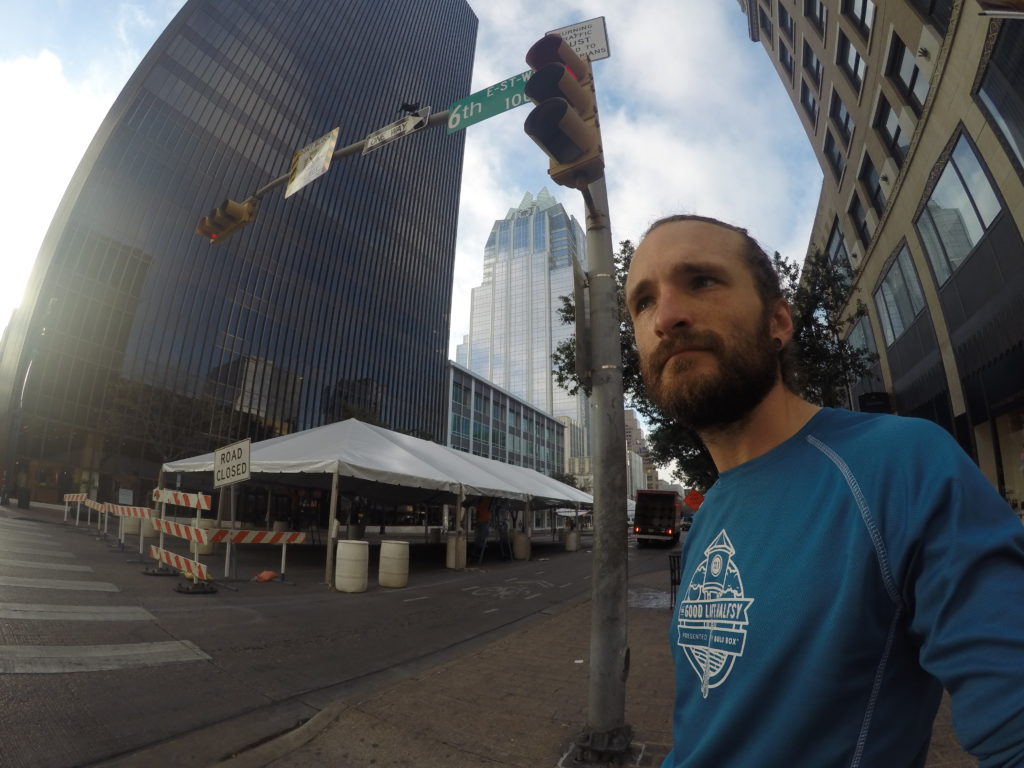 Staying around the same area for a week is fun because I get to know where things are at without having to use my phone. Congress, here, was the main stretch and the race start/finish street. 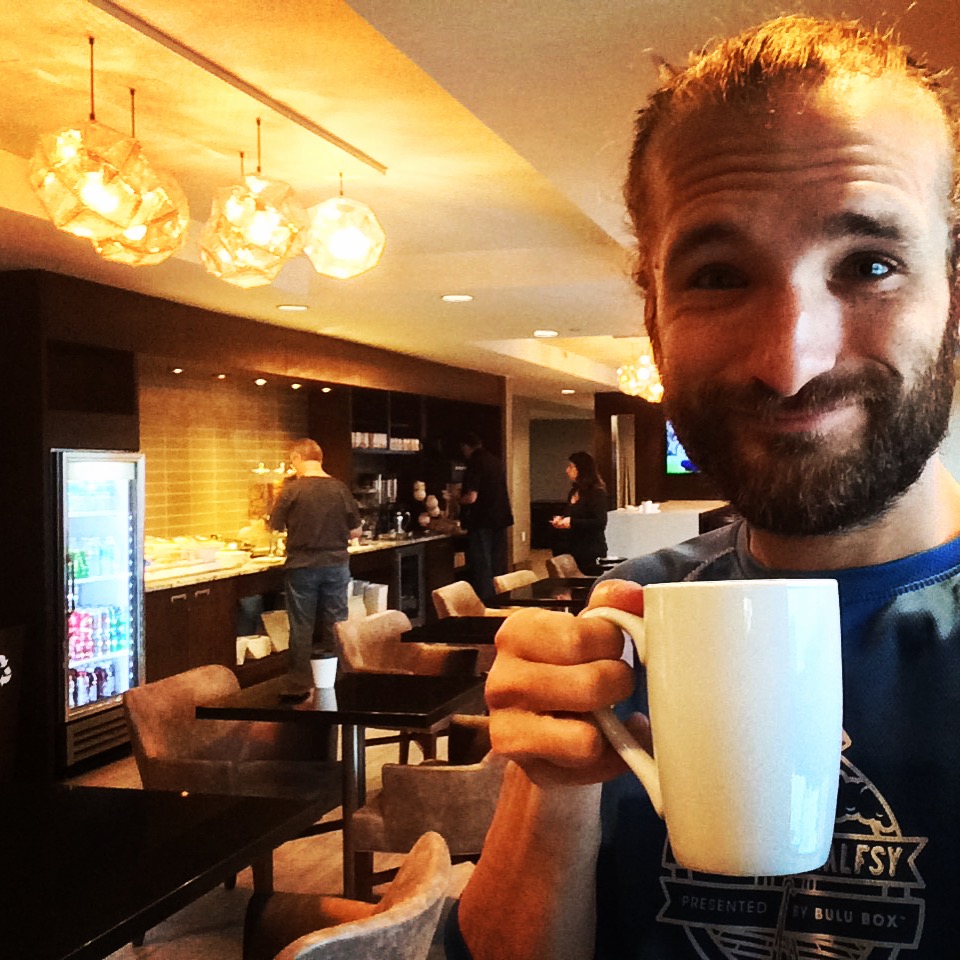 The executive lounge actually had really great coffee with a nice crema on top. 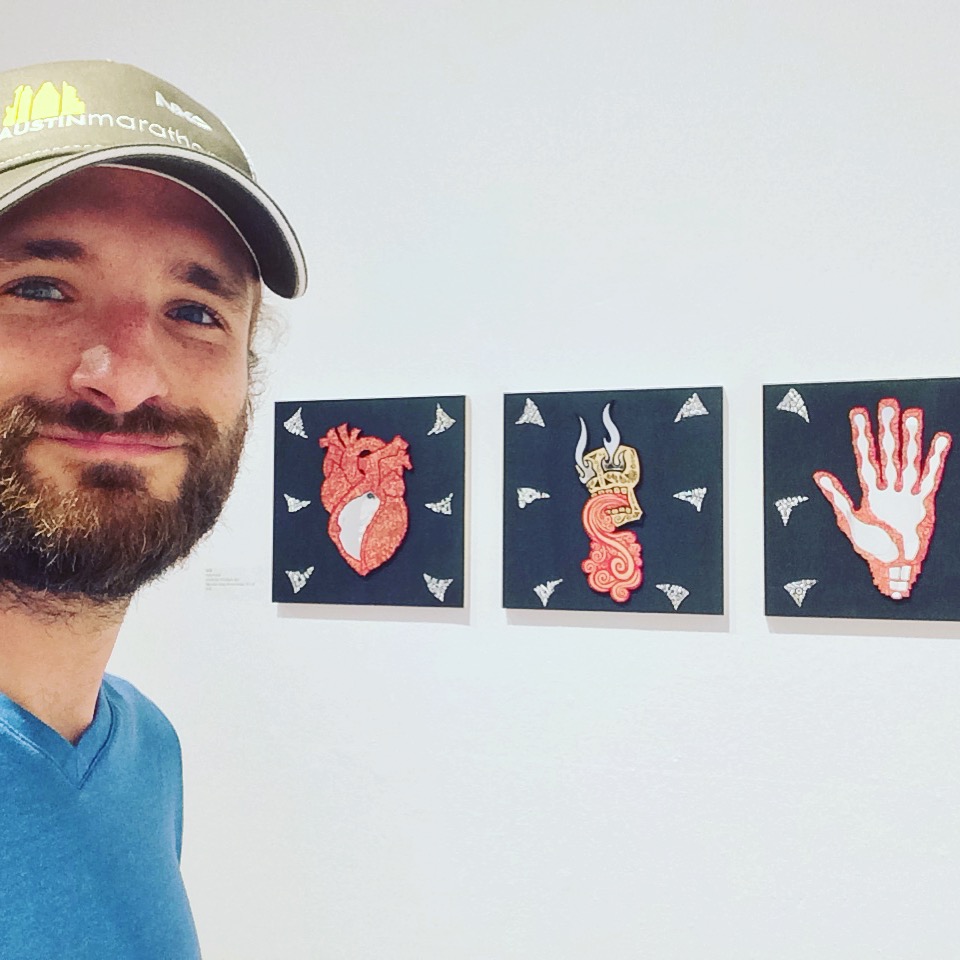 Visited the Mexic Arte Museum that was blocks from my hotel and on the same street as the race. 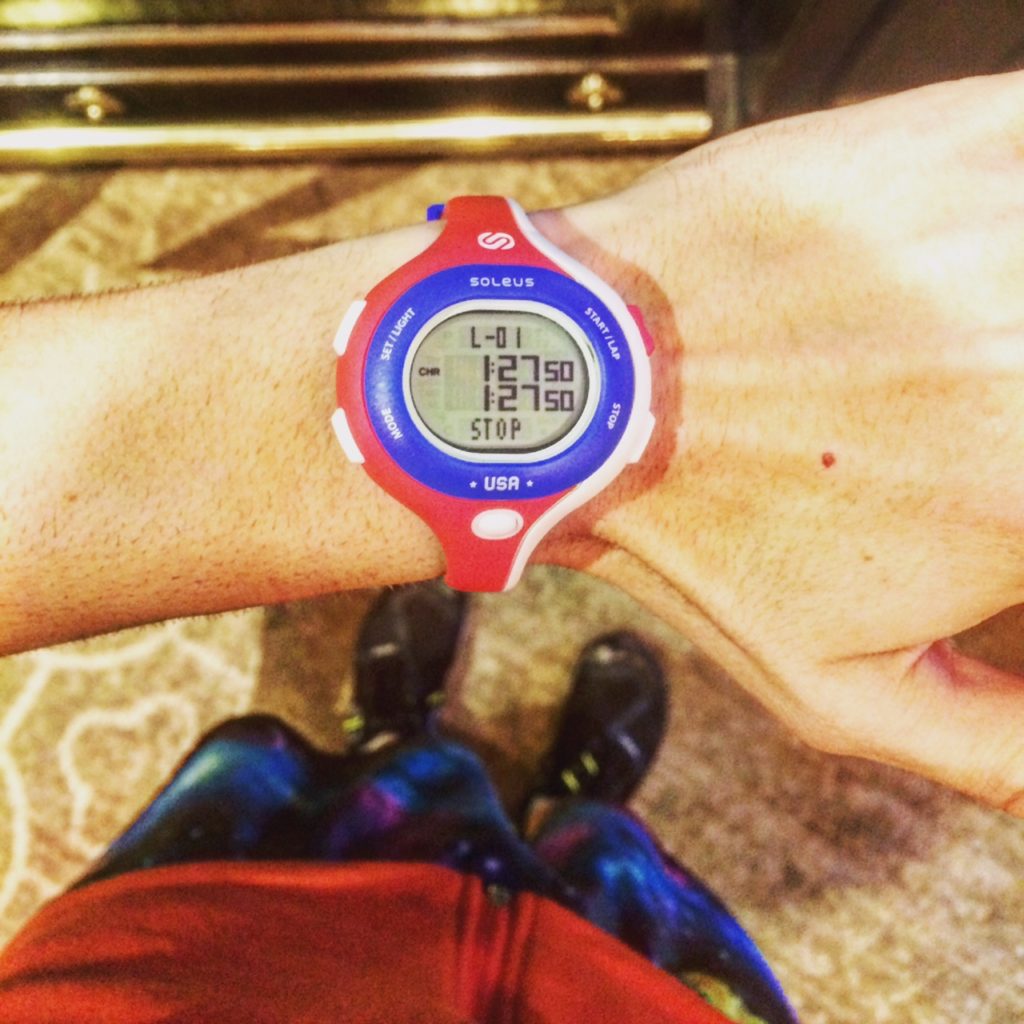 Kept track with this, thankfully, because the on-course timing was not correct at each 5k mark (but the results have it correct). 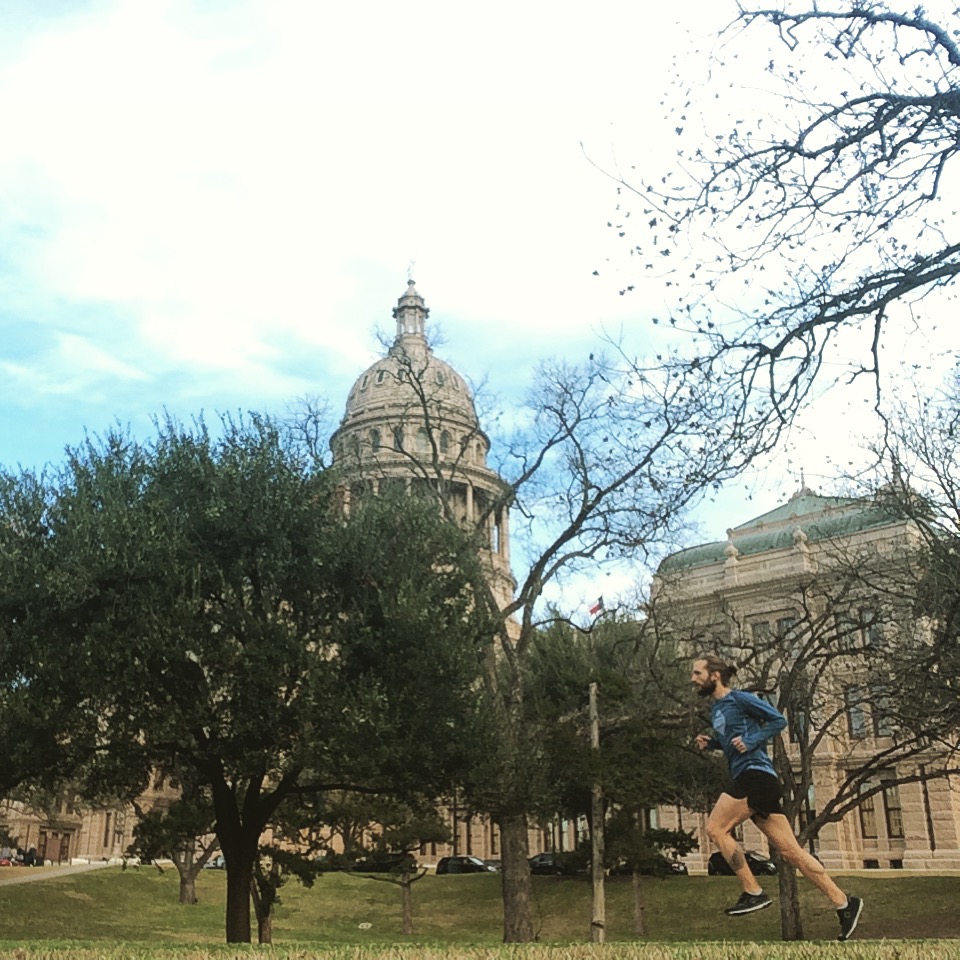 The capital was close so I ran there and checked out the University of Texas grounds as well. 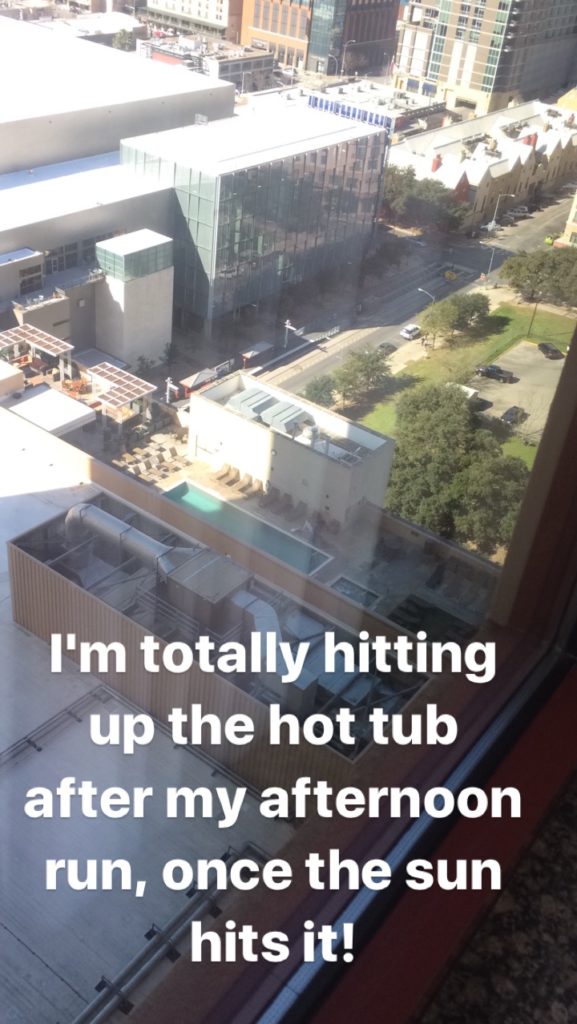 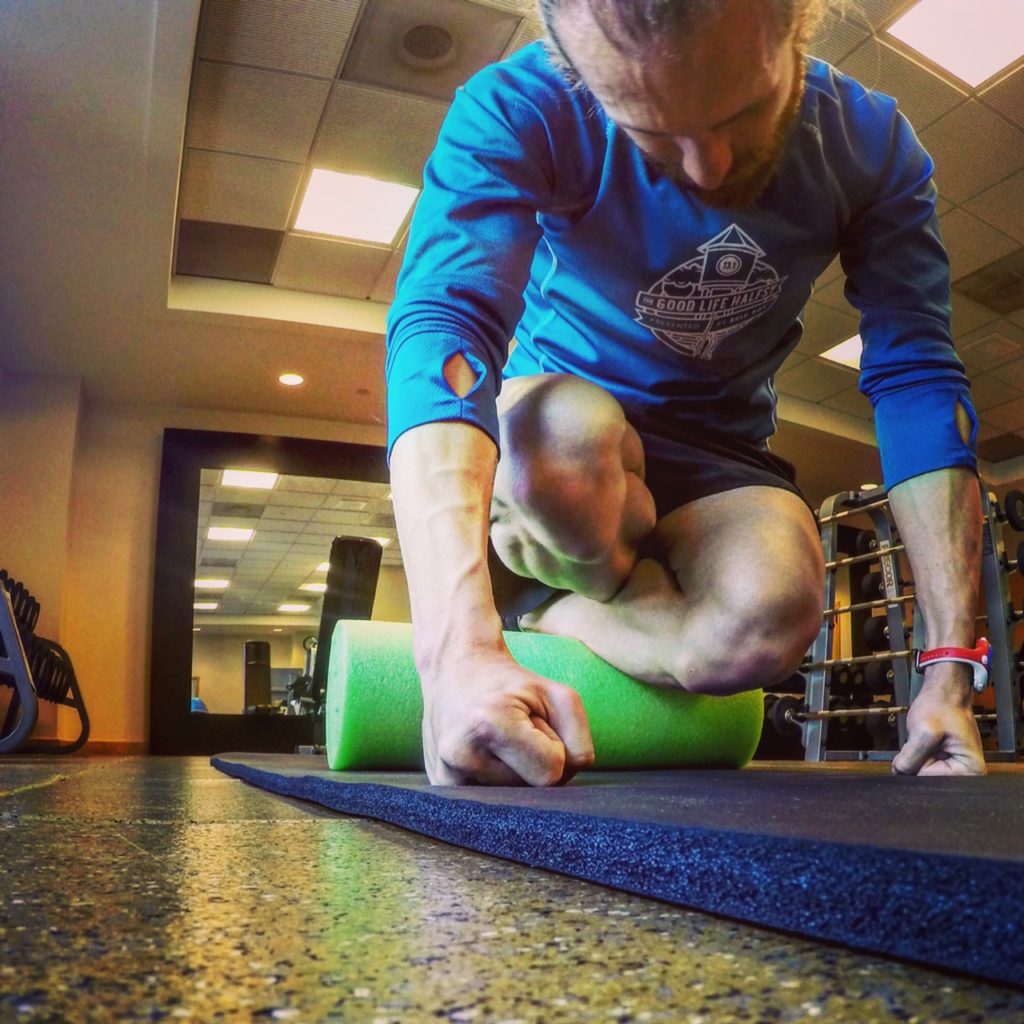 I used the rollers on floor 8 once or twice every day. I think it really helped loosen up my legs. 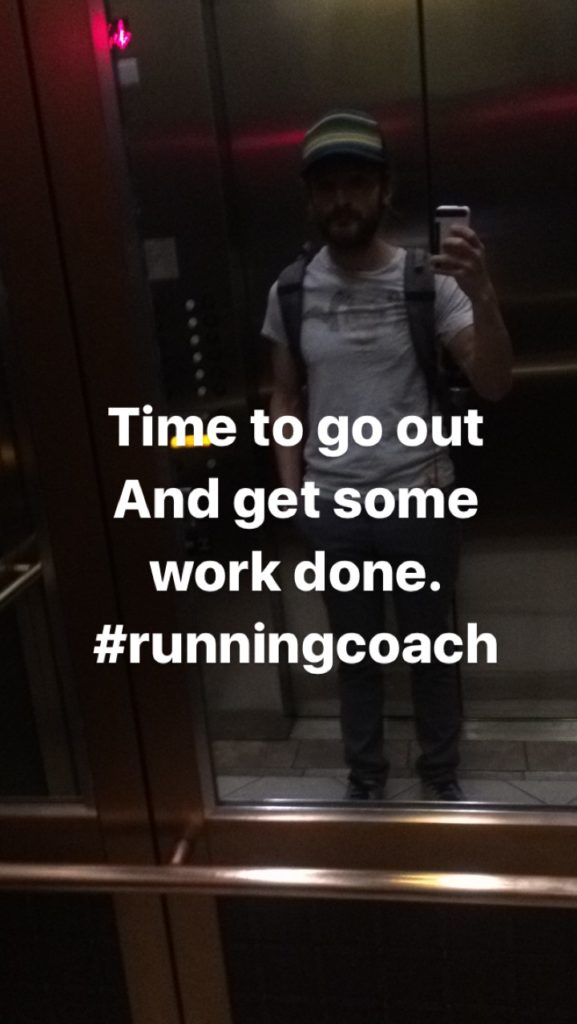 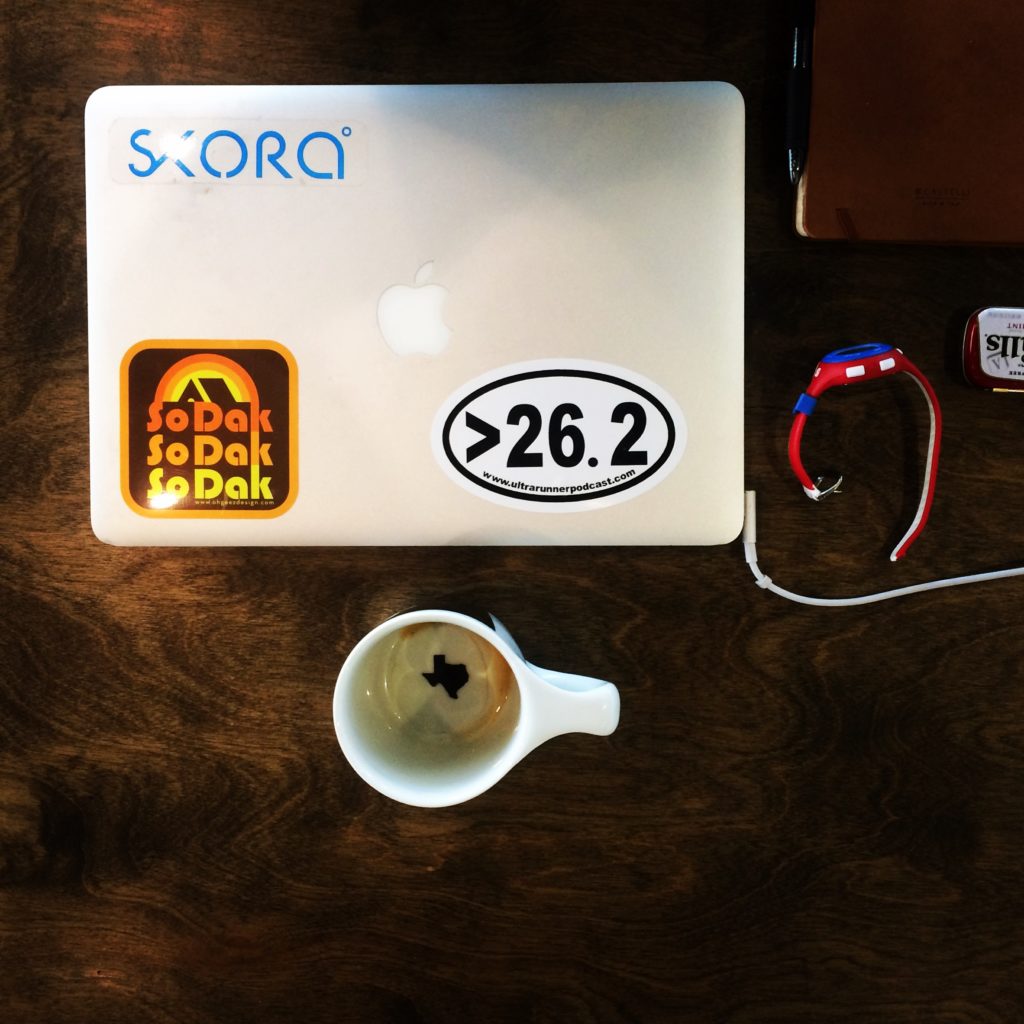 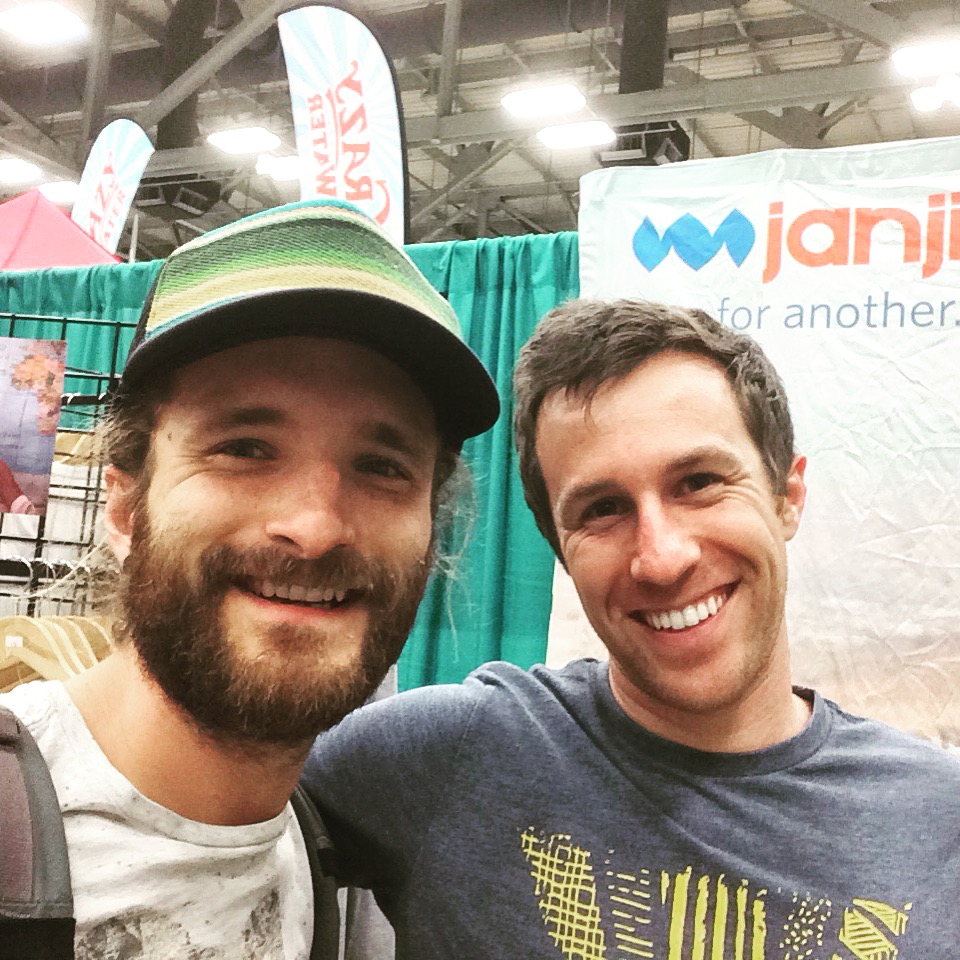 Got to meet a founder of Janji, a clothing company you should check out! 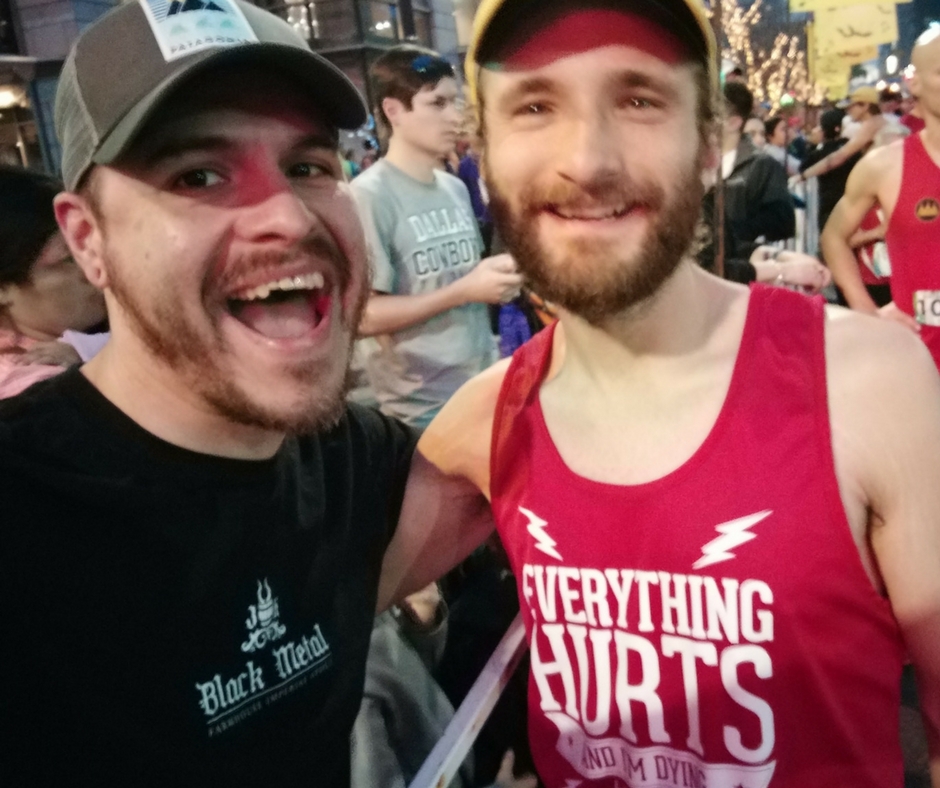 Ran into the man who made and sent me this singlet! 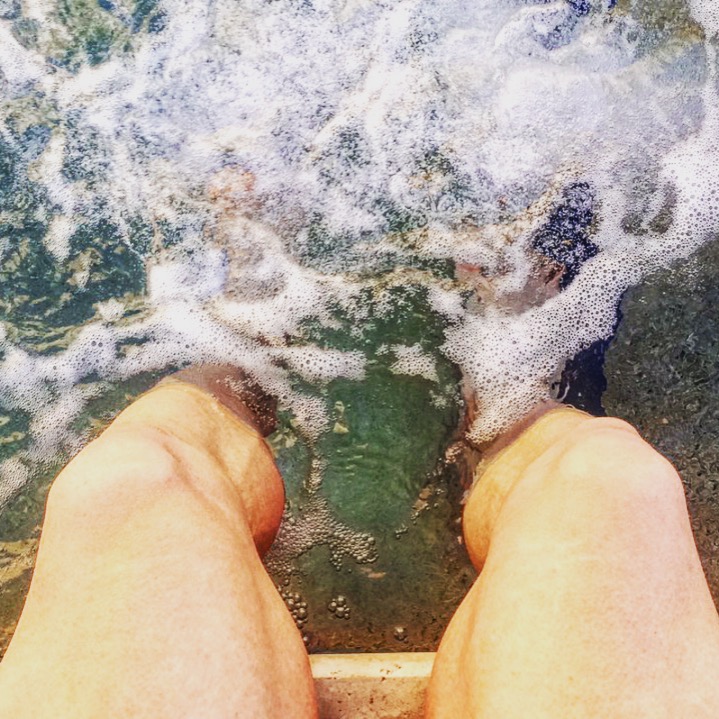 The rolling + hot tub combo happened at least once daily. 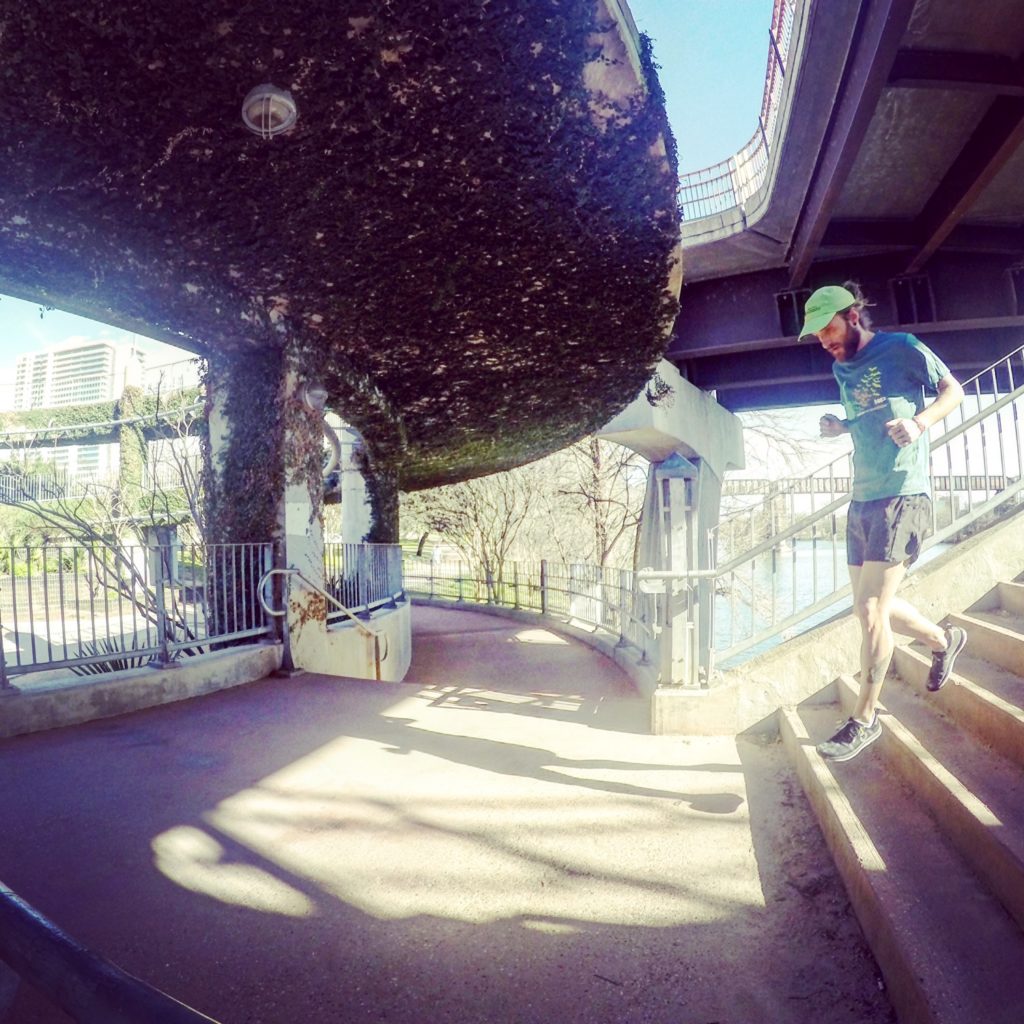 The trails at Lady Bird lake were fantastic! 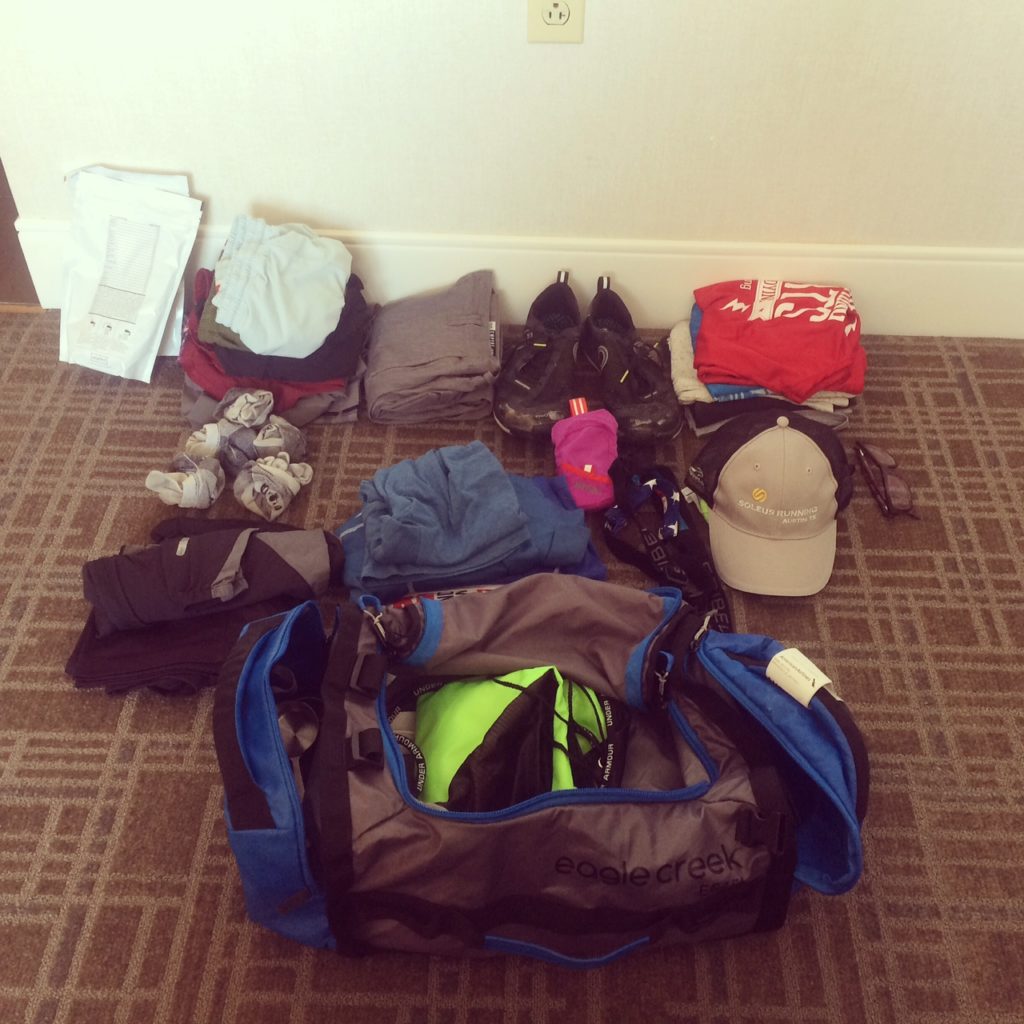 How I organized all of my stuff at my hotel room. 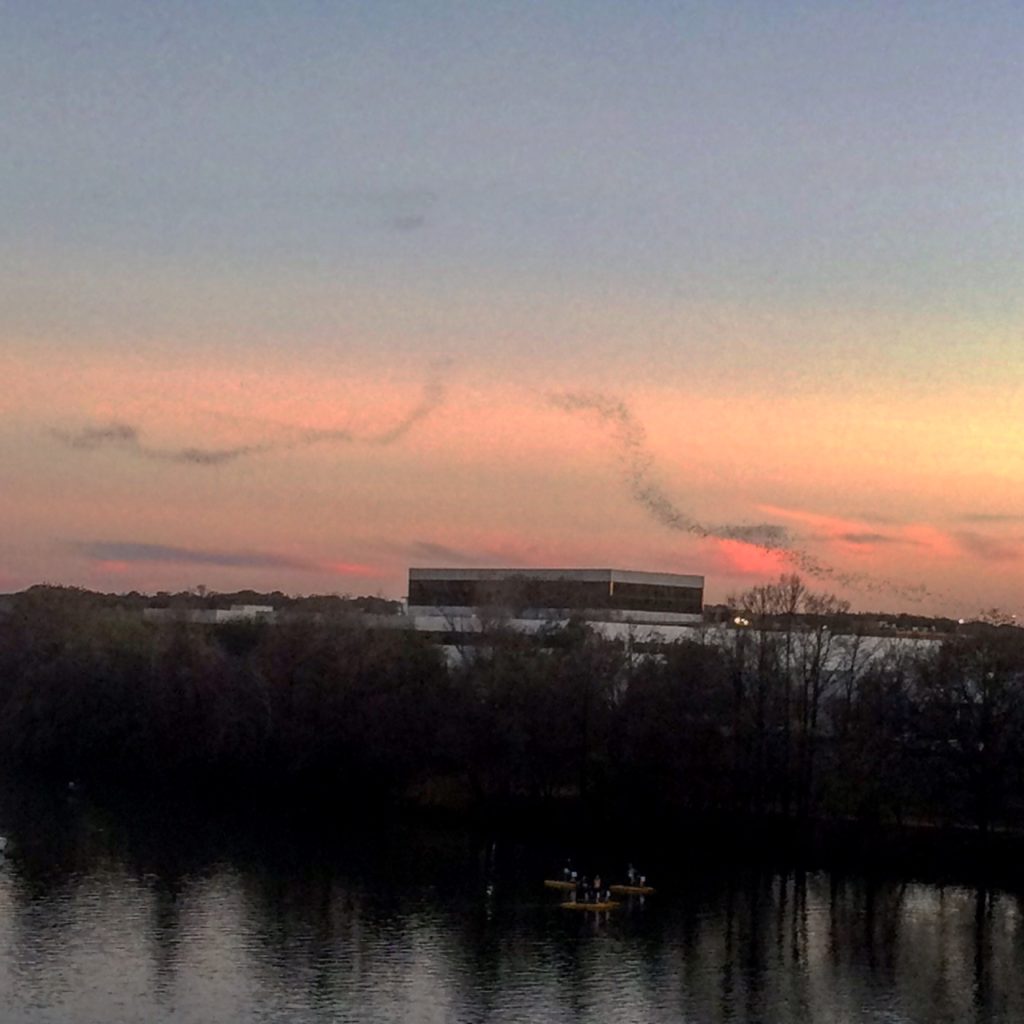 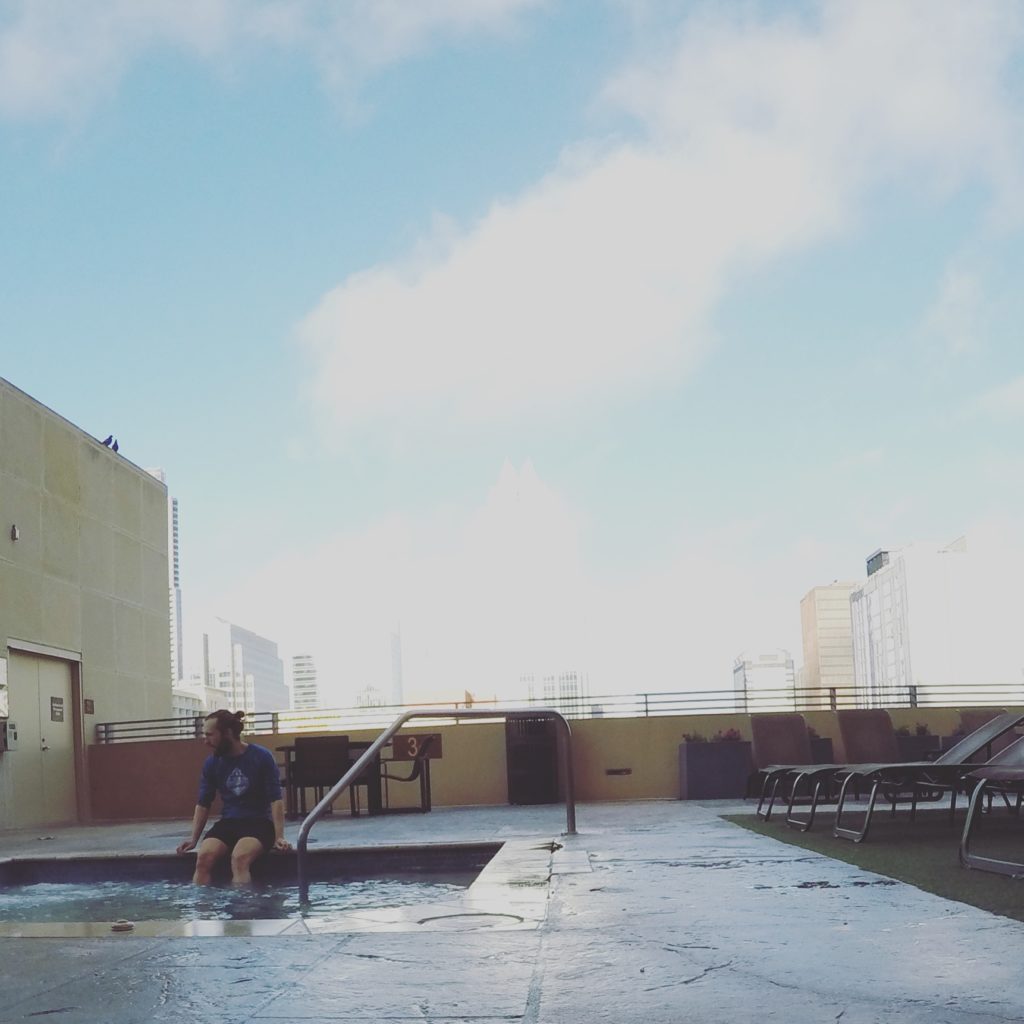 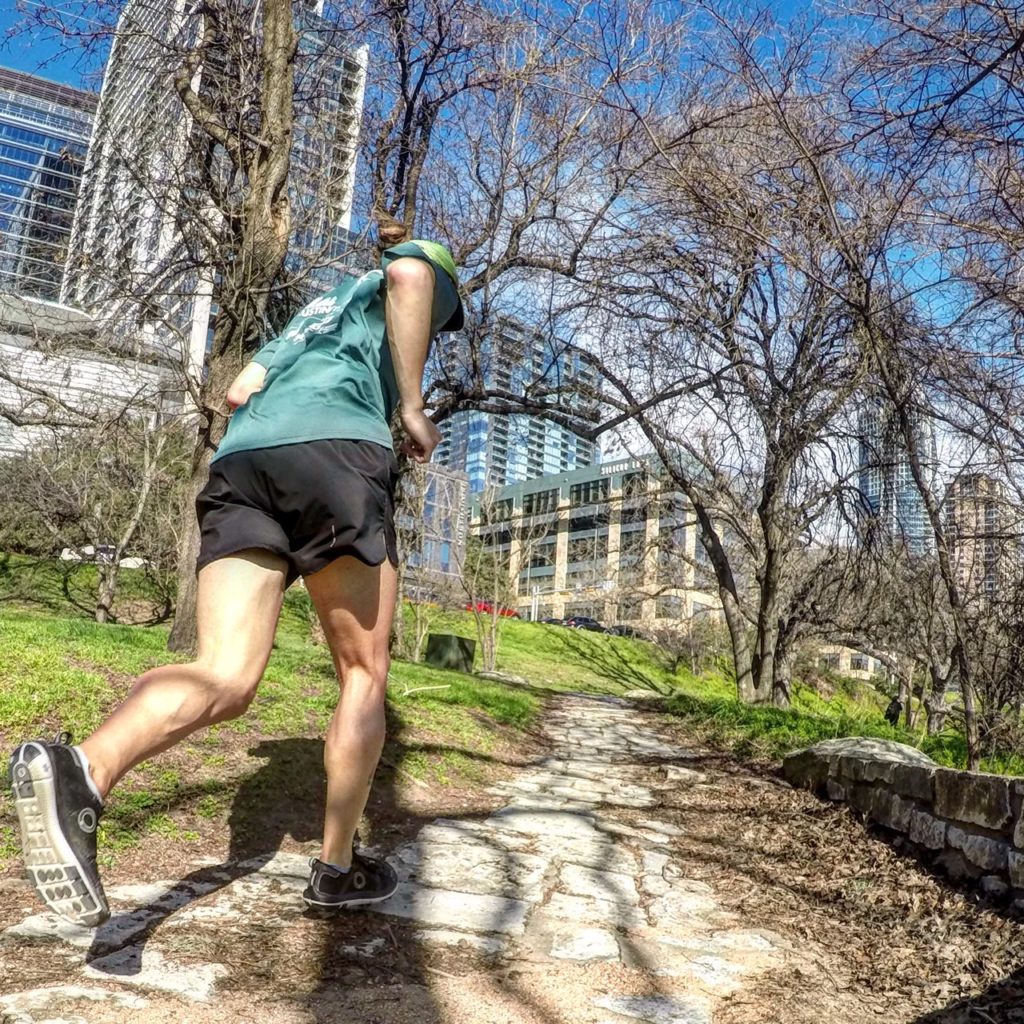 The man that checked me in at the Hilton said there were maybe 16 miles of trails with a great deal of variety, at Lady Bird Lake. 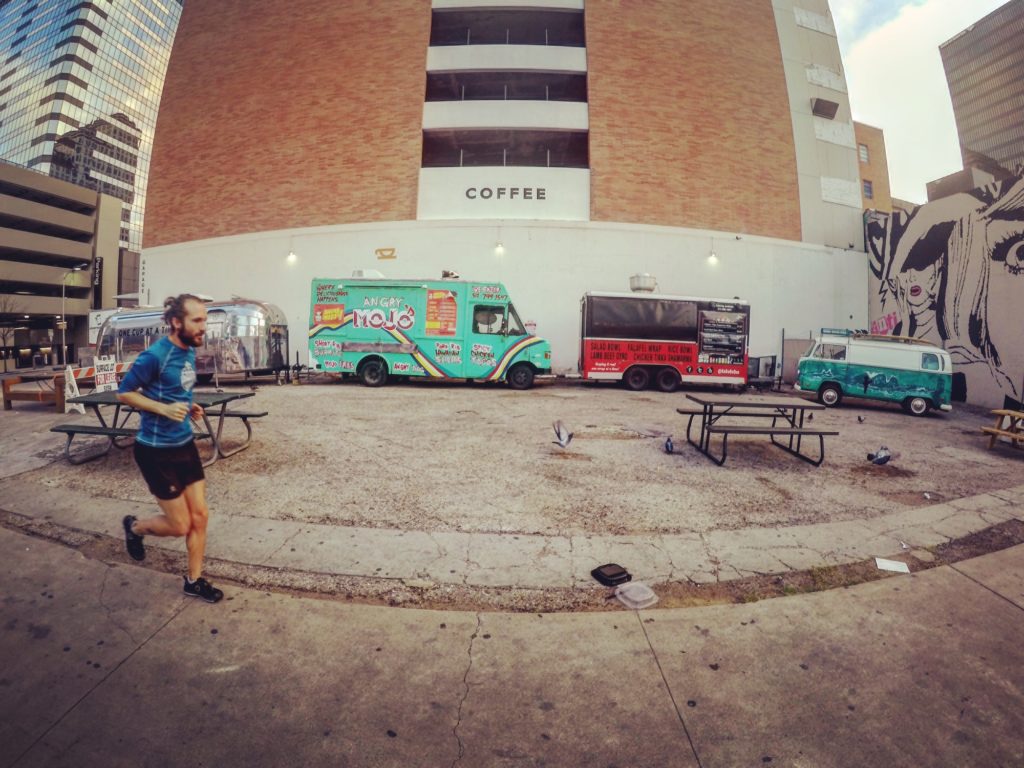 Many food trucks in Austin. 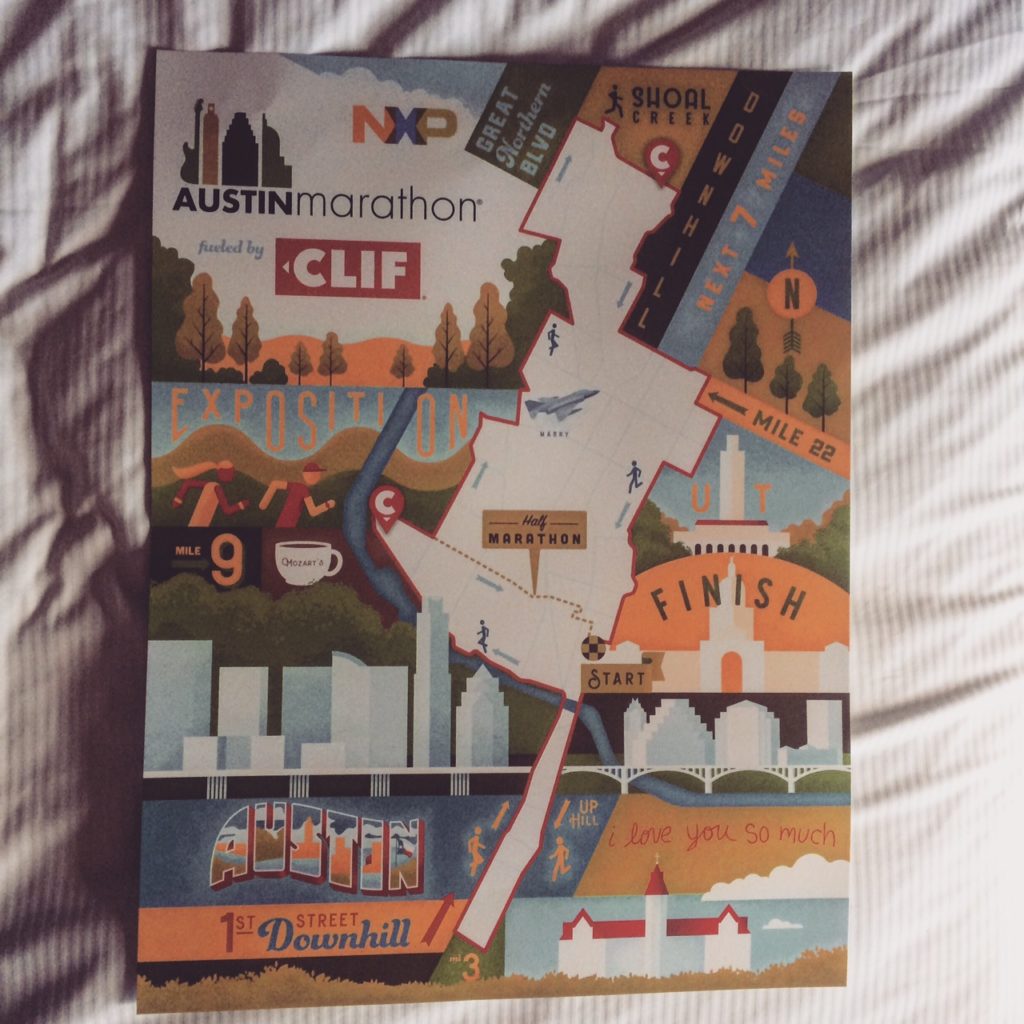 This free poster from Clif Bar will look great in my home office.