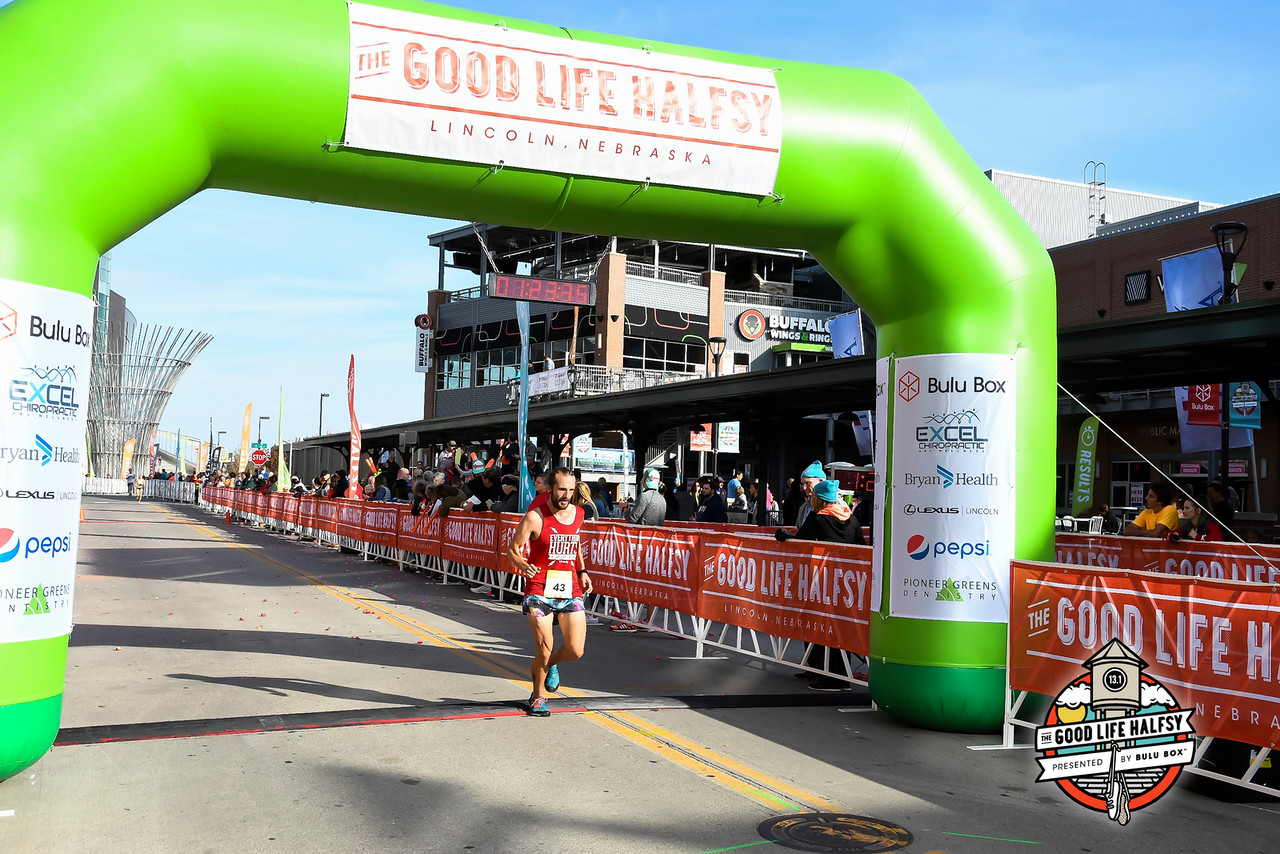 Why I Signed Up

In early October I ran my A race for the summer/fall, the Crazy Horse Half Marathon.

This run was my fastest 13.1 mile run in two years and only one second shy of my personal best. I was faster than I’ve been in two years and wanted to take advantage of my current fitness so began searching for another half marathon to run.

Enter The Good Life Halfsy on November 6. Registration had closed but men and women with certain race times (sub 1:29 and sub 1:40 respectively) could get in after it filled. So I emailed Pink Gorilla Events and signed up!

I had never felt better after a half than I did after Crazy Horse. The more consistent longer runs paid off. I rested up for a few days and then got back into training, basically repeating the key workouts (minus the long runs) that I did the four weeks pre-Crazy Horse. I performed better during these workouts the second time around but always felt a bit more sore the day after than I did the first time. My volume was slightly reduced since I was not running the weekly 14-16 miler.

I was expecting a fairly flat event. The course has a few rollers during the first 5k, some slight climbs but a net downhill during the middle 10k, and then a bit of ascent at the end.

Since I just ran a 1:23:12 on gravel I did expect to best that on a net downhill pavement course. 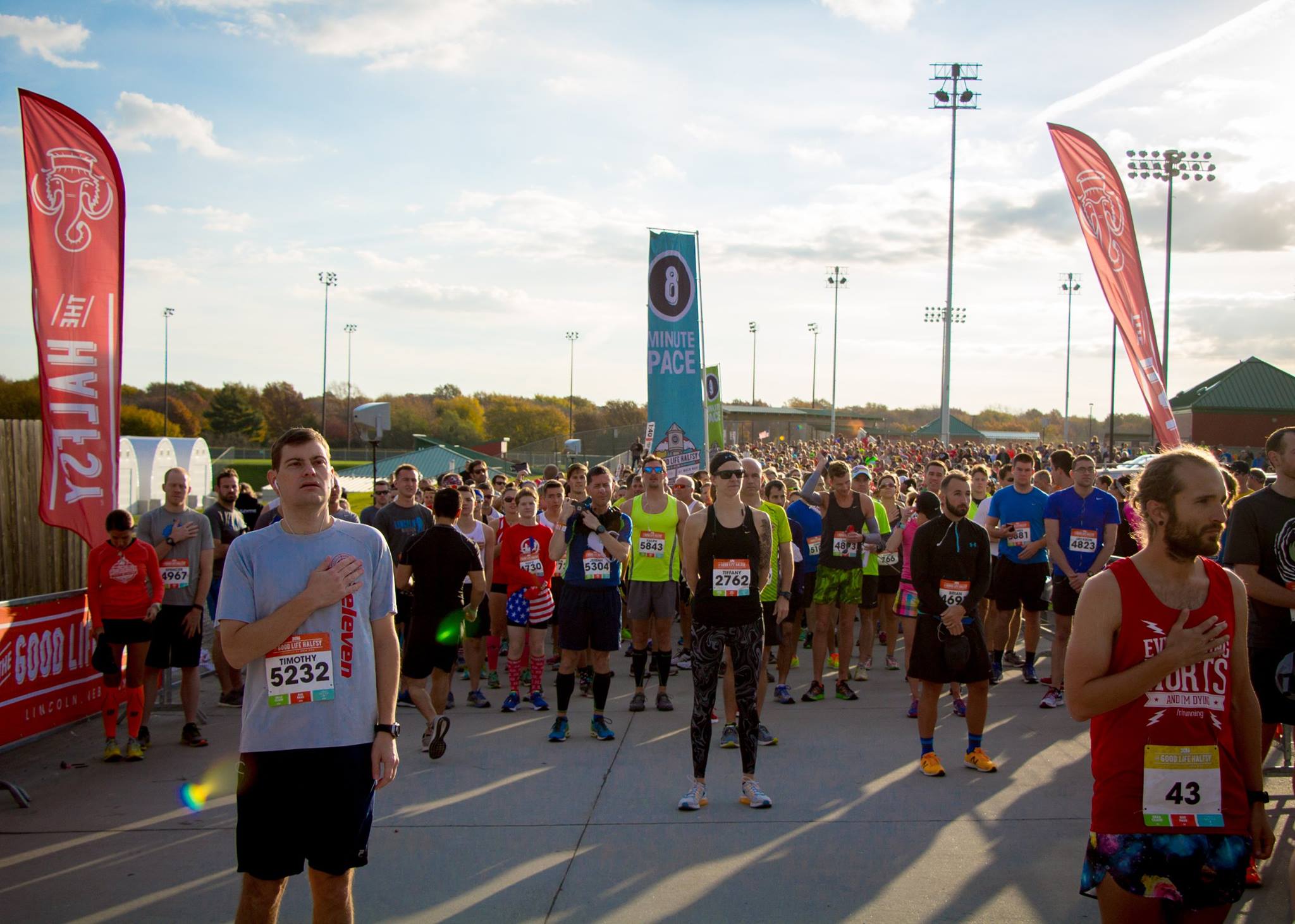 I was staying with Paul and Molly, two friends who ran Deadwood and invited me to stay with them in Lincoln  if I ever was in town. They lived about 10 minutes from the start and we drove there the day before to check it out.

There was tons of parking and plenty of port a johns. I gave the volunteers a drop bag that I could pick up at the finish and went for a bit of a warmup jog. With about 15 minutes before the race I hung out at the starting line, bouncing around. Someone asked me if I make Youtube videos and that they had just watched one.

The early section section was in to the wind and had the bulk of the hills. In retrospect I probably should have ran a bit slower than 6:14 average, but it was a very very easy and comfortable pace. However with the hills and wind I was likely working harder than I felt…such is racing!

Through here we sort of got into our spots. I was in 49th place at the 5k mark under a cloudy sky. 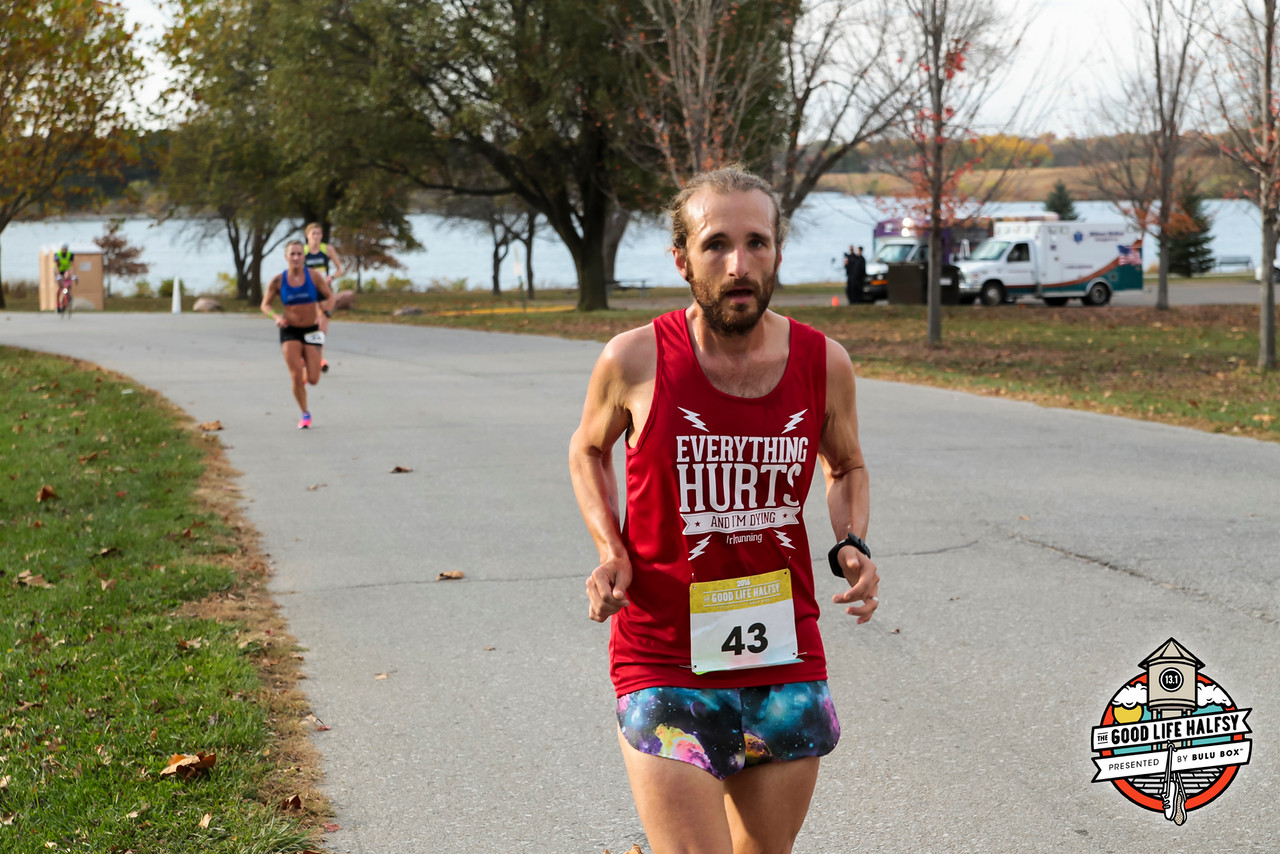 I did run this slower than the first, my 6.9 mile time was 43:56 at a 6:22 mile pace and now in 45th place overall. I was running very comfortably and relaxed. Basically the same effort as the first 5k but of course at as lower pace once the race-start high was past.

This section was a net downhill but still slightly rolling the entire time. I grabbed a couple Gatorade cups and took a sip here and there but otherwise ran through most aid stations. The weather was a super comfortable 60 or so degrees. It was a bit cold at the start and I was a little chilly but once I was moving it was perfect. There were many people in tights and/or warmer tops and I suspect they got quite hot since they were running slower and out in the sun (that came out at about a half hour into the race) longer. 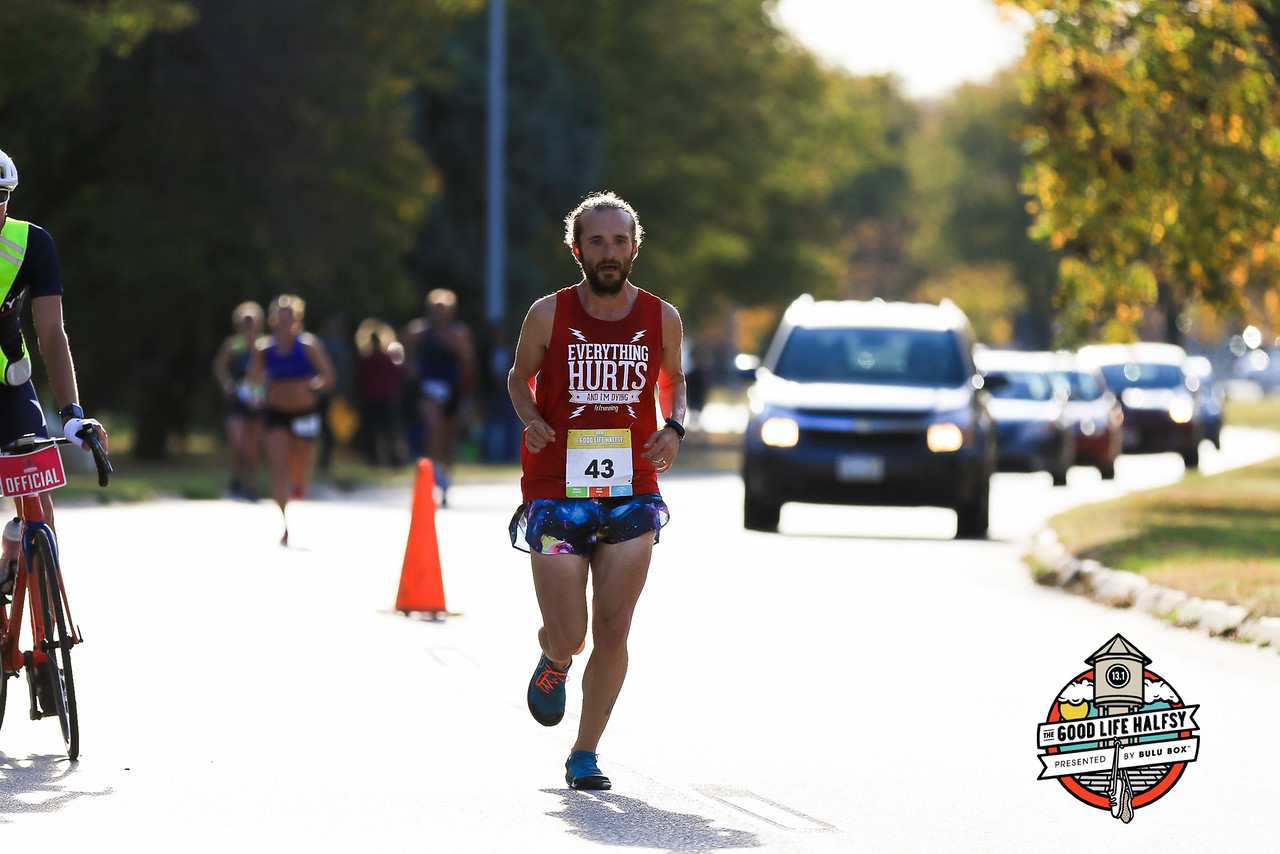 During this final segment I cranked it up, especially so in the last mile. I knew getting a PR or not was going to be close. I was no longer looking at my watch and just running as hard as I could. 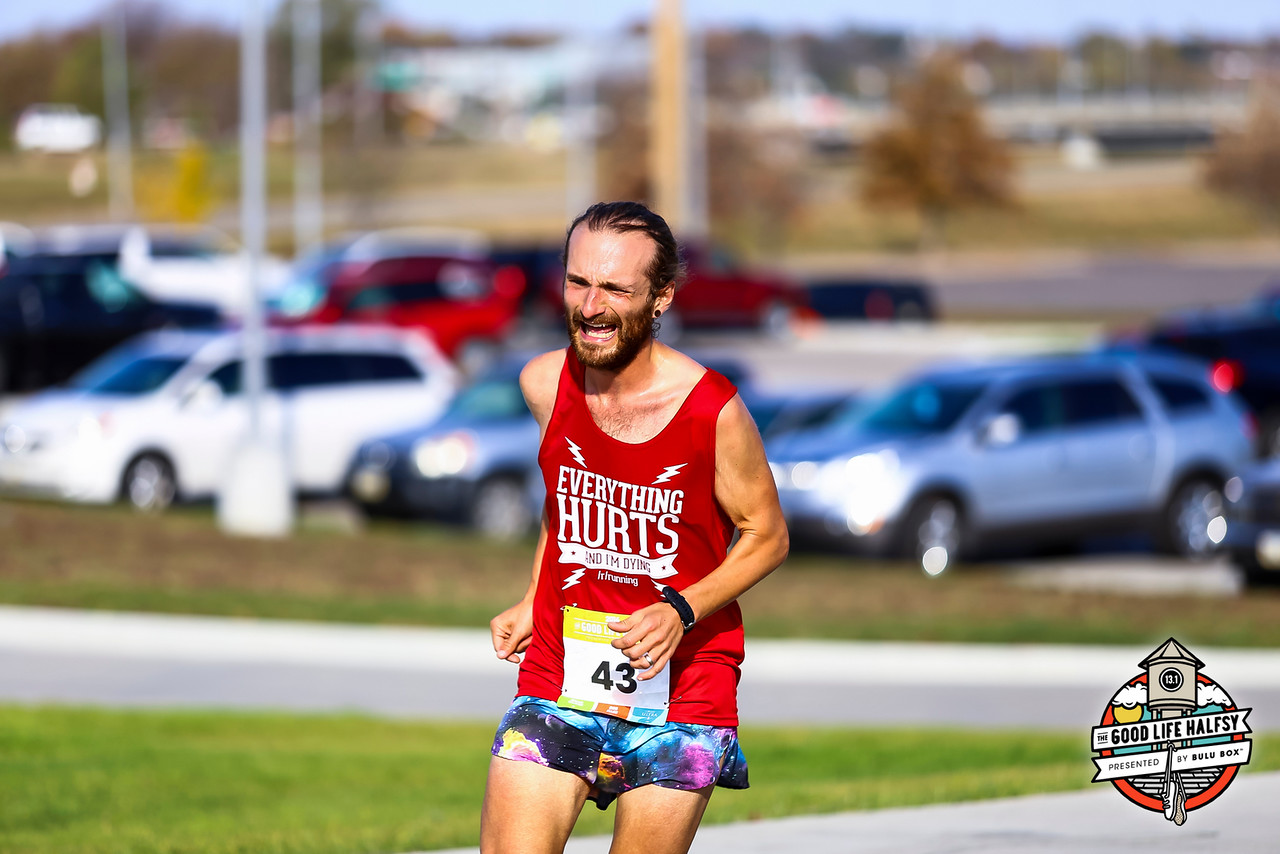 Covering the final 5k at a 6:30 pace and passed a few more people. After the net downhill last 7 miles the bit of climbing at the very end was tough! Especially that damned bridge at the end. I crossed the finish line in 1:23:30, 20 seconds shy of a PR but finishing within the top 1% of the 4100 participants.

I ran well, after everyone sort of got into their positions during the first few miles I think only one guy passed me and he had clearly started off super slow because he zoomed by like I was standing still. I wouldn’t even be surprised if he got to the start late and was just playing catch up, he was quick. Now that I think of it…I may have actually repassed him during the last couple miles… 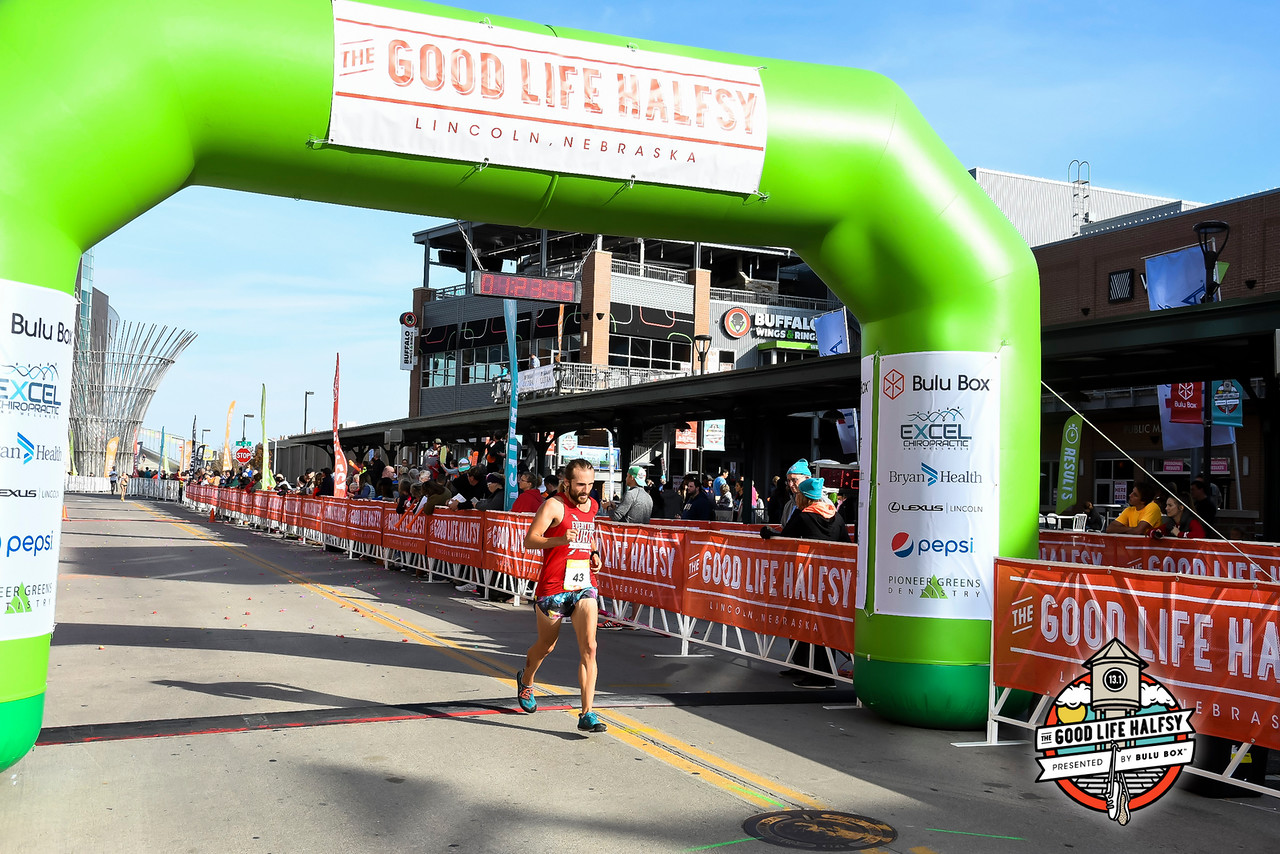 I’m quite happy with this run, first off. This was my third fastest half marathon and my second fastest in two years. No doubt I’ve improved since my PR and I’m confident next year when I get racing again I’ll run better.

The course was much more rolling than I had expected it to be. The last five half marathons I’ve ran have been basically flat with any hills all at once. Fargo is pancake flat other than going under train tracks. Crazy Horse and Deadwood each have hills but other than the climbs and descents it’s super flat. Although the elevation change was slight each mile had some noticeable up and down.

I’m not sure if I would do anything different, looking back. Maybe tell myself to run a bit slower during the first 5k, but it’s certainly not like I overdid it.